November might be a tad too early for this manicure, but it's too beautiful not to share... Plus it may give you some ideas for festive nails, and such important things should be planned in advance, shouldn't they? 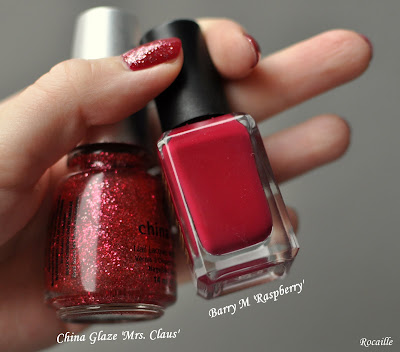 I don't think I had ever featured Barry M 'Raspberry' on the blog before, which is a shame, because it's such an amazing polish - definitely one of my favorites. It's not a coincidence that it was given to me by one of my favorite bloggers, Loveaudrey, and that for this NOTD I've decided to pair it with a gift from another favorite bloggette, Suka&Spice (do I need to tell you to go check them out like NOW if you haven't already?). The moment I laid my eyes on China Glaze 'Mrs. Claus', I was in glitter heaven. I couldn't stop twirling the bottle in my fingers, admiring the beautiful sparkles and trying to figure out how the heck China Glaze made this so awesome. Just look: 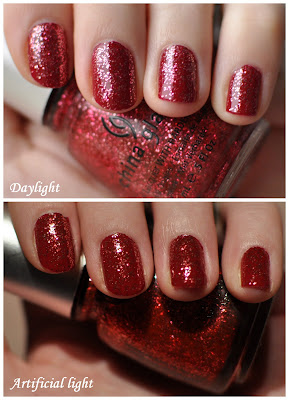 The above combo was achieved by layering two coats of 'Raspberry', two coats of 'Mrs. Claus' and a coat of Seche Vite to secure it all in place. After a very close inspection, I decided 'Mrs. Claus' must be silver glitter suspended in a red gel base, which lends the sparkles a pinkish appearance. I haven't tried it on its own yet, but I reckon you'd need a good couple of coats to achieve a more 'opaque' look. I can't wait to layer it over some more nudish shades.

'Mrs. Claus' is a part of China Glaze Holiday 2010 collection 'Tis the Season to be Naughty and Nice' and is available both separately as well as in gift sets; I was given the 'Merry Mint' set which also comes with another holiday polish, 'Naughty and Nice', and a Peppermint Cuticle Oil. Expect more reviews/ NOTDs to follow.