Bad beauty blogger strikes again: would you believe I'd never tried the cult L'Oreal Voluminous Original Volume Building Mascara* ($5.50 - 8.50 for 0.28 oz) before? My first lash love from L'Oreal was the Telescopic, but when I repurchased it more recently, it turned out to be a bit of a fail (review here). After that, I wasn't too tempted to try another L'Oreal mascara, even though the brand releases at least a few new iterations every year. However, I was recently sent the original Voluminous and since it's a HG product for a lot beauty bloggers and gurus out there, I was very curious to give it a try. 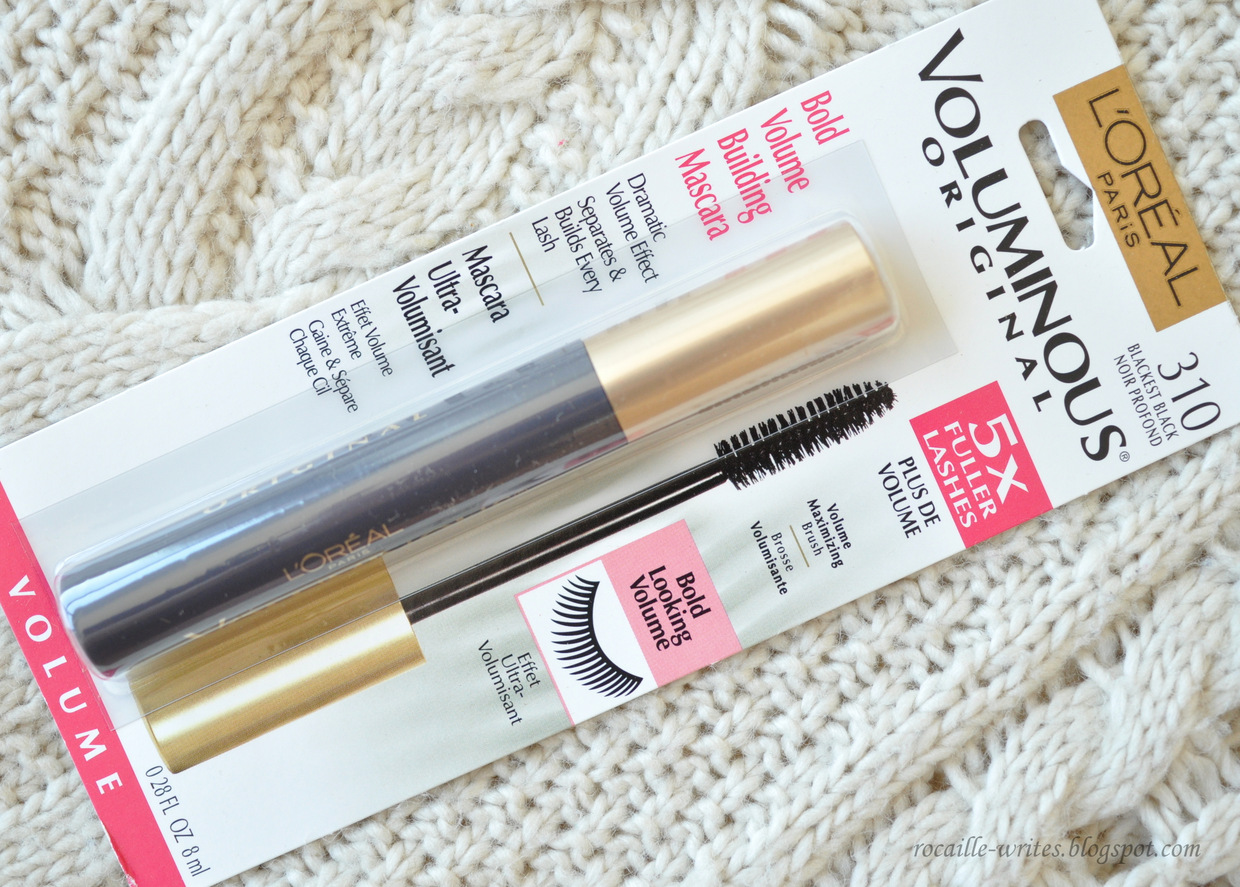 In general, I increasingly believe that mascaras are a rather personal thing - what one person expects in terms of result may be the worst nightmare for the next. My lashes aren't in their best condition currently: they're fine, they're not very dark, they're not as long and full as they used to be, so I feel like I need help across all departments. Mascara also has a tendency to transfer onto my browbone easily, so that's another thing I like to watch out for. When it comes to my preferred mascara look, I like long, full but soft and well defined lashes - anything that fails to separate is usually a no-go, regardless of how voluminous it may look. 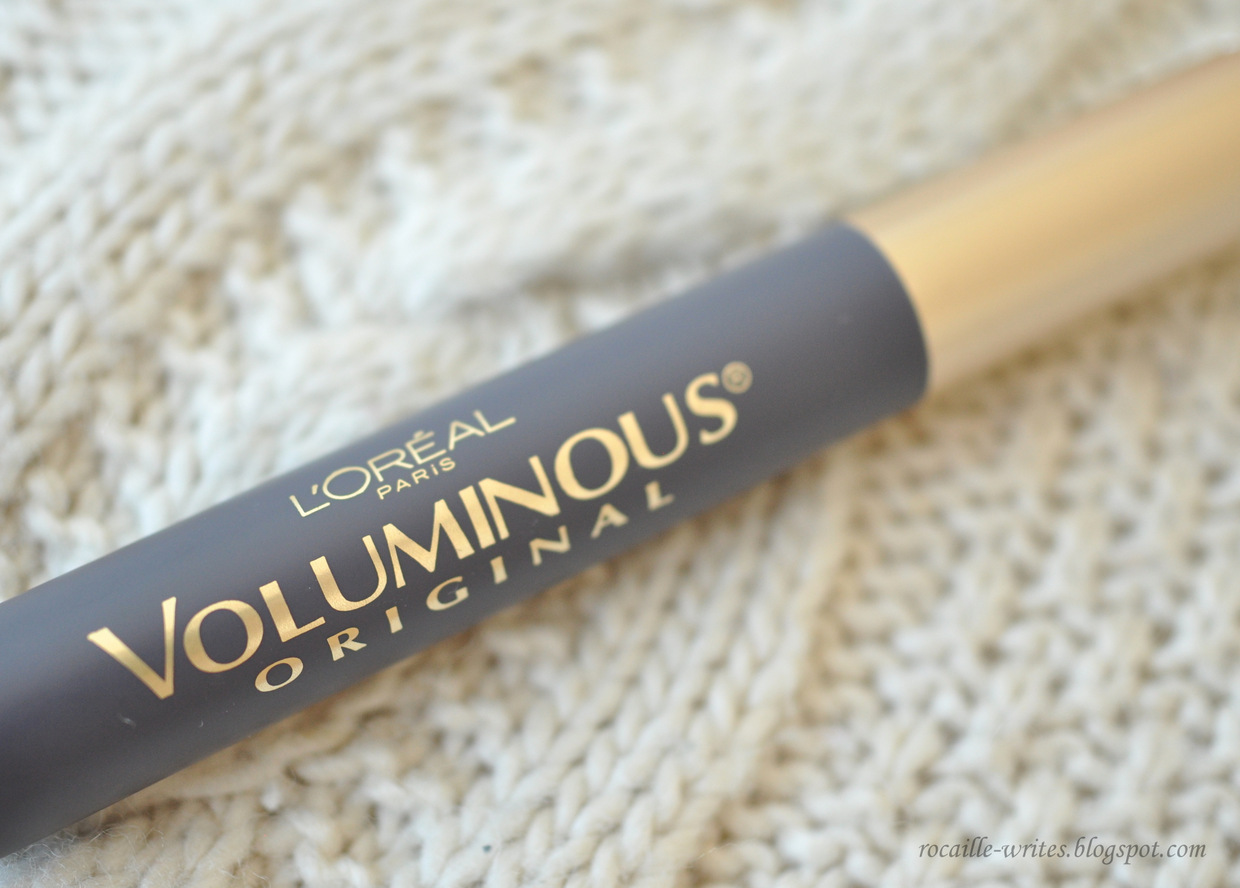 The Original Voluminous (I have the shade Blackest Black) comes in a very simple dark grey tube with a gold cap. The brush also looks like the most old school, standard, run of the mill wire bristles at the first glance; but when I first pulled the wand out of the tube, I was surprised how fluffy it looked. I tried hard to show that in the photo by angling the wand - hopefully you can see that this brush has lots and lots of rather short bristles. I've had mascaras with this general type of wand before, but the bristles were usually spaced farther apart and/or longer. The tip on the Voluminous tapers down a bit and usually gets rather clumped up with product when you pull the wand out, so I always clean it off on the neck of the tube and only use it to add drama to the outer corners of my eyes. 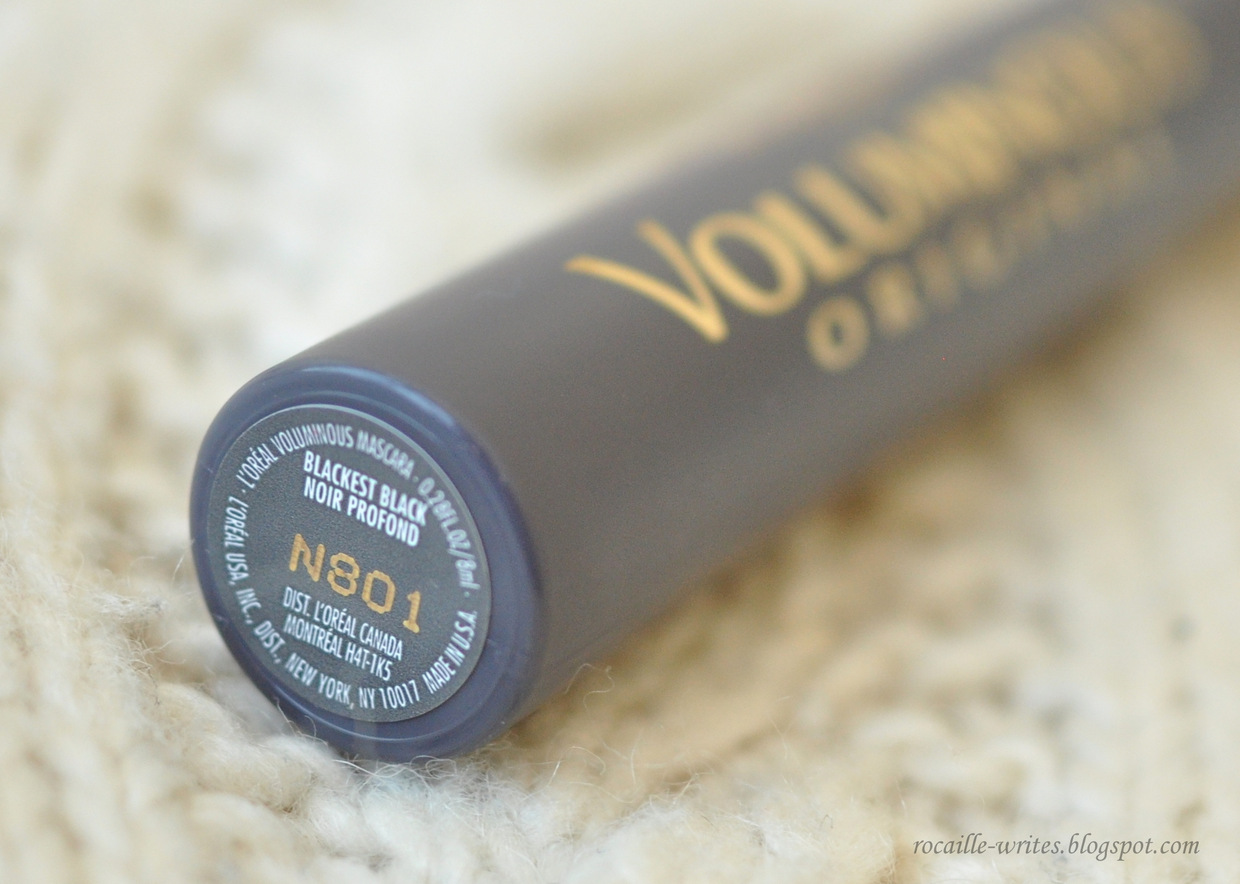 My expectation for the Voluminous was that this would be an 'extreme drama' type of mascara - meaning that it would absolutely load the lashes with mascara at the barest swipe of the wand, and that it probably wouldn't separate them. Well, I was wrong - it's nothing like that. The stopper very effectively cleans the brush off the excess mascara (with the exception of the very tip) and that combined with dense rows of shorter bristles allows you to control the end result very well. 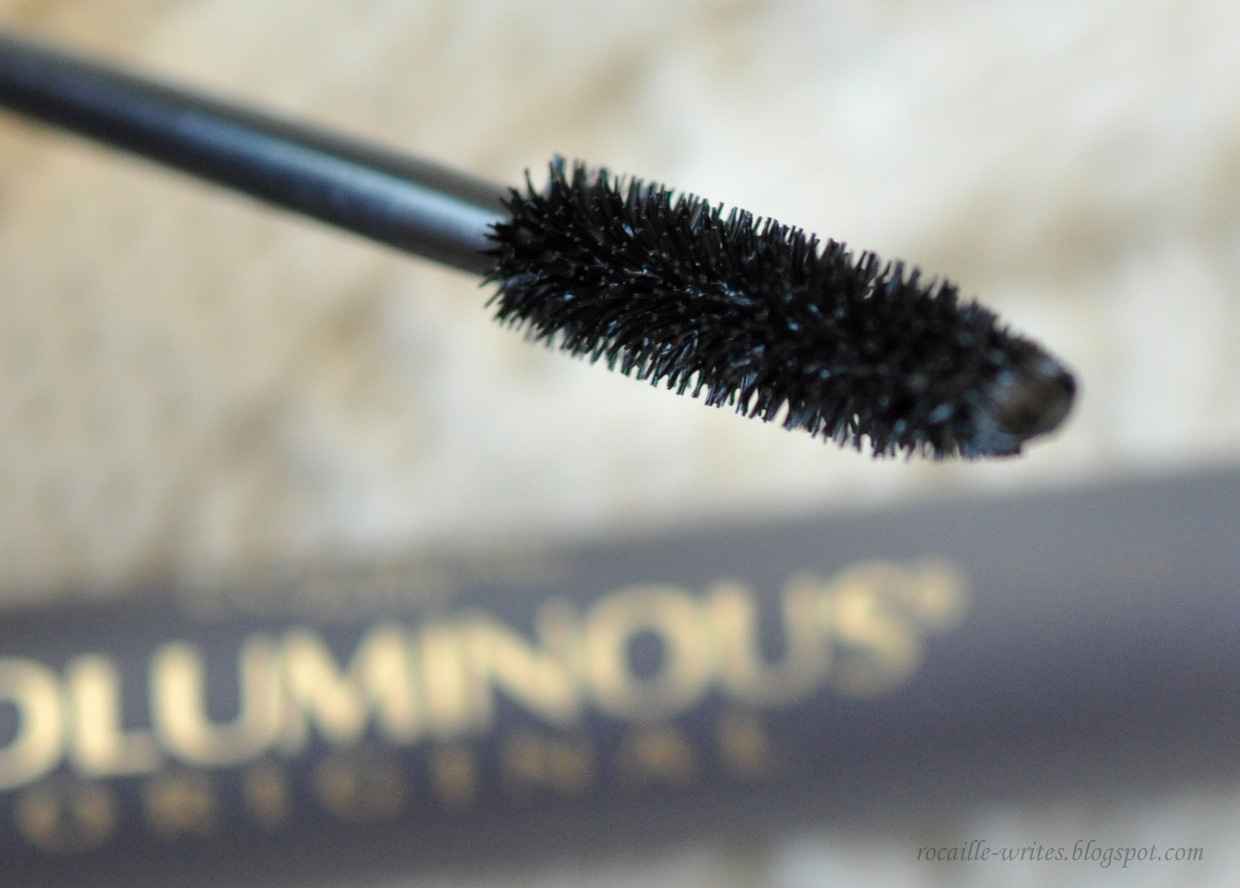 I hope that you can see this from my slightly creepy eye close-ups, but one coat of L'Oreal Voluminous gives very natural, soft, pretty lashes. It gives plenty of fullness at the roots while at the same time, leaves pretty much no clumps at the ends, meaning that it doesn't really look like you're wearing mascara at all. Every single lash is defined, volumized and lengthened, and the wand fans them out nicely (I haven't used a lash curler for these photos). 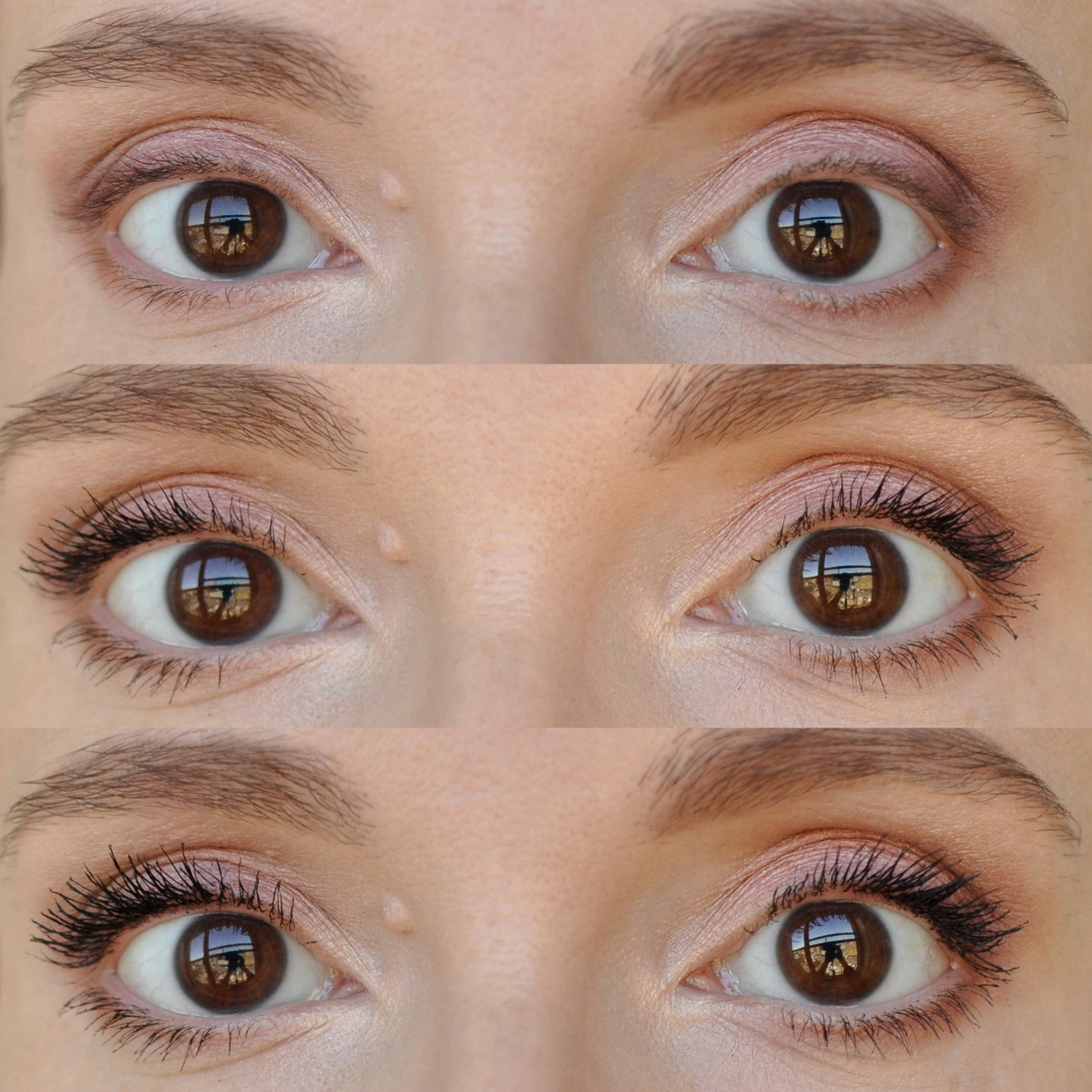 At two coats, my lashes start to look a bit more dramatic, but still not overloaded with product or over the top for daytime - two coats is actually my perfect balance. The lashes are even thicker but still not clumpy, and there's a little bit more length there as well. Now when it comes to wear time of this mascara, so far I haven't noticed any issues - I do see however that it can take a few minutes for the Voluminous to dry completely on my lashes, so looking up right after application or trying to mess with your eye make-up is not the greatest idea. But once it dries, it stays on well the entire day without smudging, transfering or crumbling under the eyes. My lashes also remain quite flexible and soft to the touch - not dry and crunchy like with some other formulas - and the mascara is quite easy to remove at the end of the day, it just melts off nicely with an oil-based make-up remover.

I don't think there's anything else I can say about L'Oreal Voluminous Original - I really love it. I haven't liked a mascara as much as this one in a really long time, and now I want to go around yelling 'Why did nobody tell me sooner?!', except they all did, didn't they ;) I can see myself repurchasing this formula over and over again in the future when I just want something that works really, really well for my lashes. Have you ever tried the Original Voluminous? What is your Holy Grail mascara at the drugstore?

Disclaimer: Product marked with an asterix (*) is a sample I received for free from BzzAgent for testing purposes. All links are non-affiliate. All opinions are 100% honest and unbiased, no matter if the products featured were purchased with my own monies or provided free of charge. Thank you for reading!
Posted by Unknown at 12:04 PM