The Surratt Artistique Brush Collection launch I attented a couple weeks back was in fact my first time seeing (and swatching!) the range in person. I was immediately drawn to the beautiful shimmery eyeshadows and lipglosses, twinkling at me from the display. But, having admitted to myself that I rarely wear lipgloss, I decided to pick out one eyeshadow - and it just turned out to be the lightest shade in the line-up, Scintillante ($20 for the individual pan 0.06 oz/1.7 g, compact sold separately). 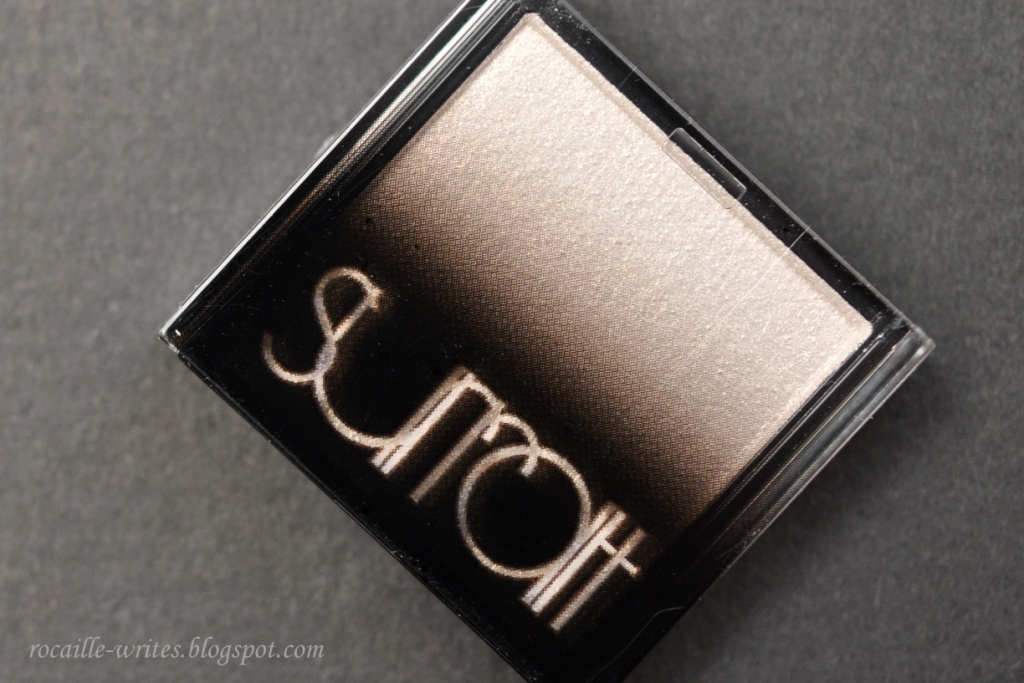 I took a couple photos of the entire counter display but they didn't turn out very well due to the quality of lighting. I was told that the vertical rows of eyeshadows are arranged to suit different skintones from the fairest on the left to the deepest on the right. Another note about the lighting at the Surratt counter in Barneys is the fact that it makes these eyeshadows appear a lot more shimmery (or should I say, sparkly?) than they are in natural light. Can we also look at these lipglosses? Belly said the shimmery blurple one was like magic on your lips. Surratt also has a black gloss in the range, which is meant to deepen the shade of any lipstick you layer underneath it. Very cool! 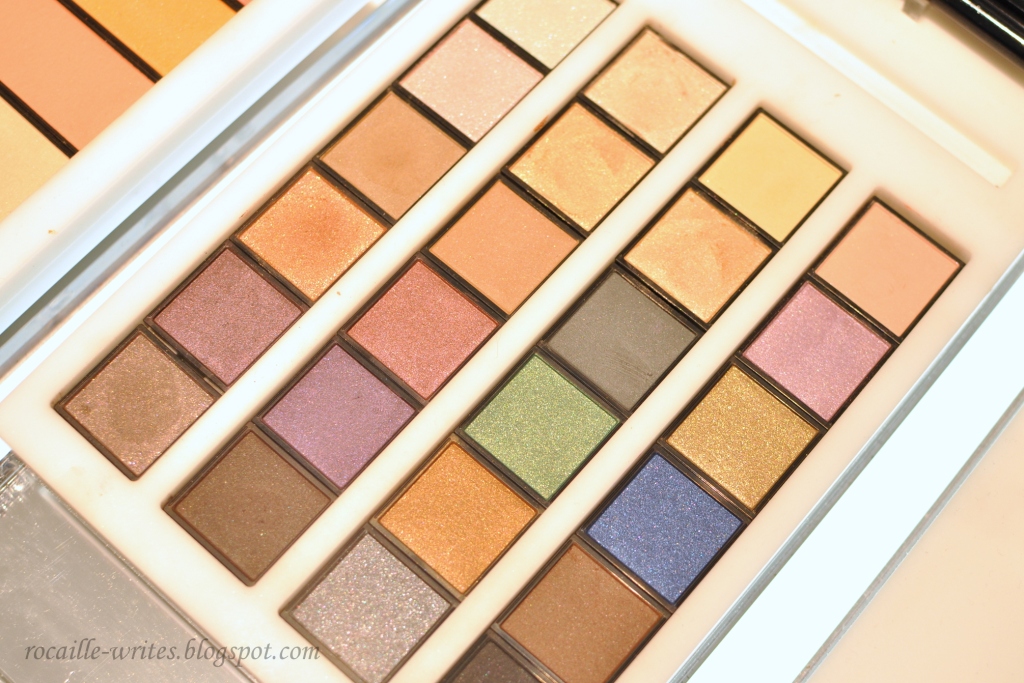 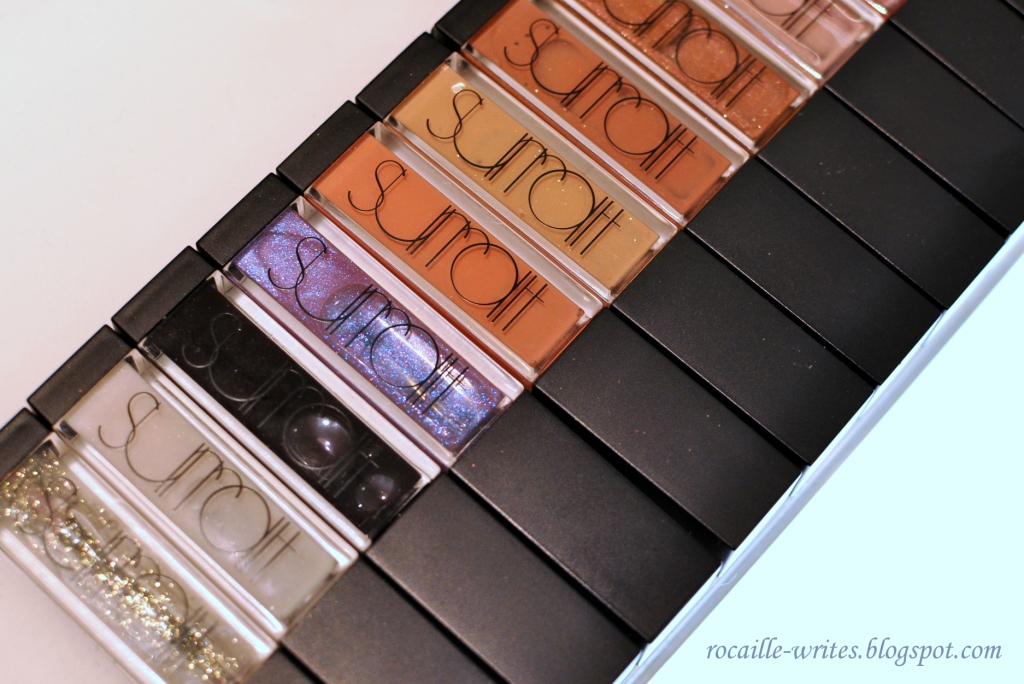 Some notes on the packaging: all of the powder products in the Surratt range are sold as individual refills (pans only) to reduce excess waste, with compacts available separately. Practically, it means that the price of a single item is higher if you want to have a compact for it (that would probably be the case of an average consumer) but quite reasonable if you don't need the case (I'm assuming that would be most beauty addicts). I didn't purchase the compact, because I intend to store my single eyeshadow in a Z-Palette. While it won't magnetize to the palette, because these pans are resin and not metal, you can either stick the eyeshadow in using the double-sided label provided on the back of your singles, or you could stick a magnet to the back - unfortunately, thus obscuring the label with your shade name. 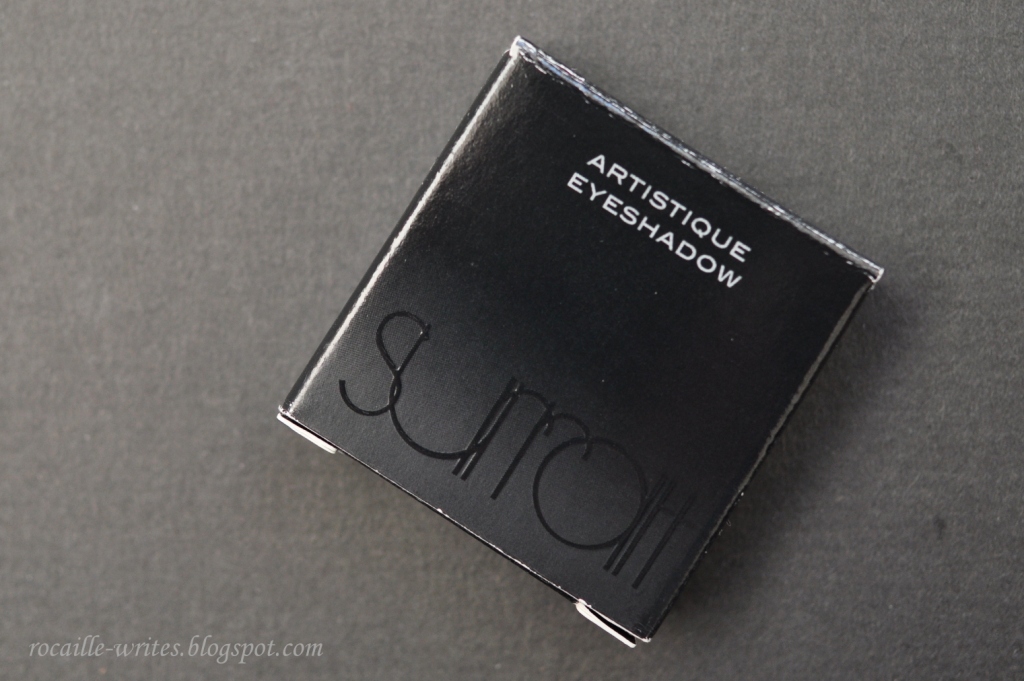 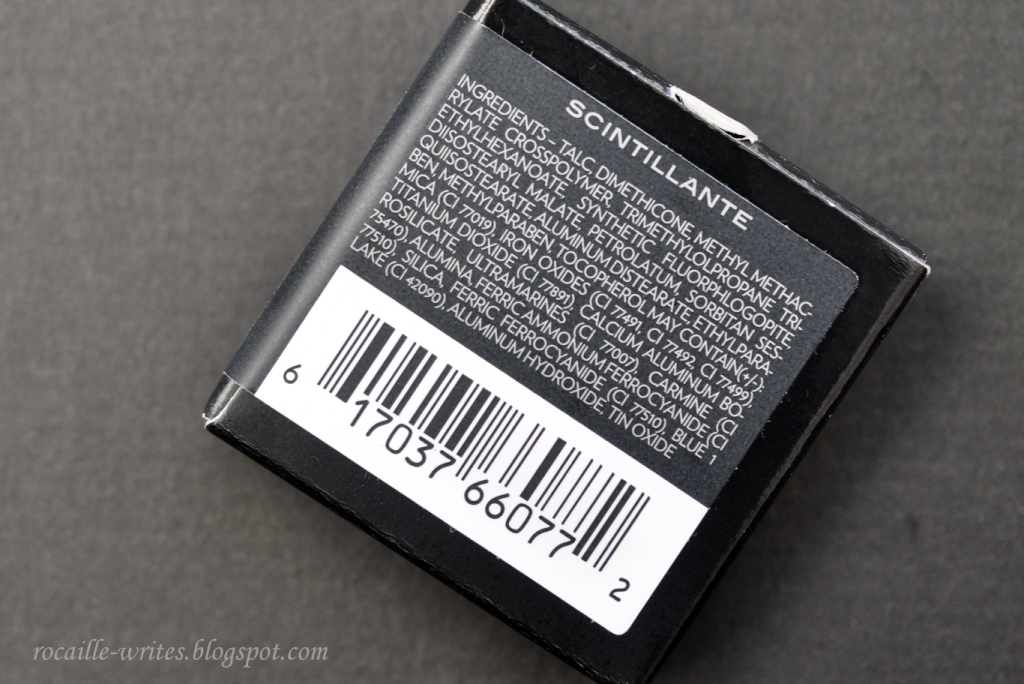 You could also just keep your singles as they come, because conversely to most brands who sell individual refills, Surratt eyeshadows have a nifty sliding lid that protects the top of the shadow - I really like this design for how simple and compact it is, and the lid is transparent so you can easily see which shade you're grabbing for. 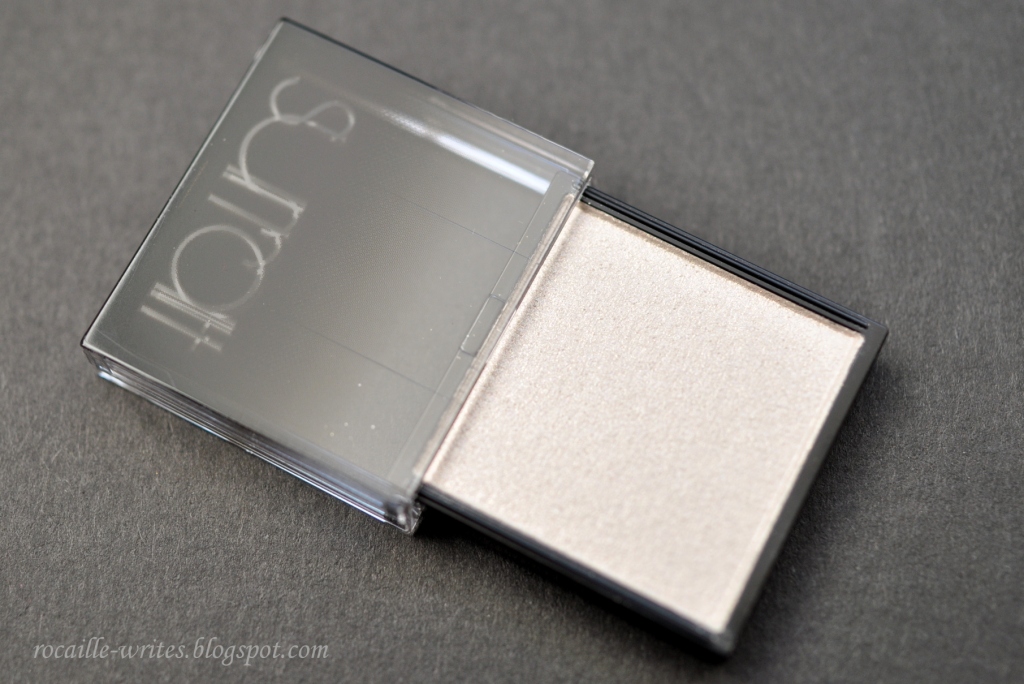 Enough blabbling about the packaging, let's talk about the product inside. Scintillante is a slightly greyish off-white with an icy gold shimmer. I understand that I may have lost you there, because having grey undertones in what is basically a highlighting shade does not sound good. But IT WORKS. See, on my fair skin, a lot of shimmery/pearly shades that are traditionally used to brighten the inner corners of the eyes are just too dark and/or too warm. On the other hand, pearly white shadows appear too fake and stark. What to do?! I think Troy hit it out of the park with this more muted, very pale white gold shade.

At the counter, Scintillante appeared to be more of a light warm beige with rainbow shimmer. In reality, there aren't many rainbows and unicorn farts going on in this shade; in diffused daylight, it has more of a glowy satin finish, similar to my beloved Shiseido Luminizing Satin eyeshadows. I've tried to capture the counter sparkle by taking an out of focus shot in direct sunlight - you can see some lime green, pale pink, orange and gold shimmers there, but these do not translate onto the eye. Probably better for everyday looks, just less fun :/ I find the texture of Scintillante to be similar to Shiseido as well, very soft and a touch loose on the brush but with supreme blendability and a finish that melds into the skin beautifully. Surratt's eyeshadows are made in Japan using the proprietory 'slurry' technology, where the liquid pigments are poured into the pans like cake batter and their surface is levelled out (not pressed) to ensure even distribution in the pan. Scintillante may not be the most pigmented shadow I've ever worked with, but it layers well and stays put for the entire day. 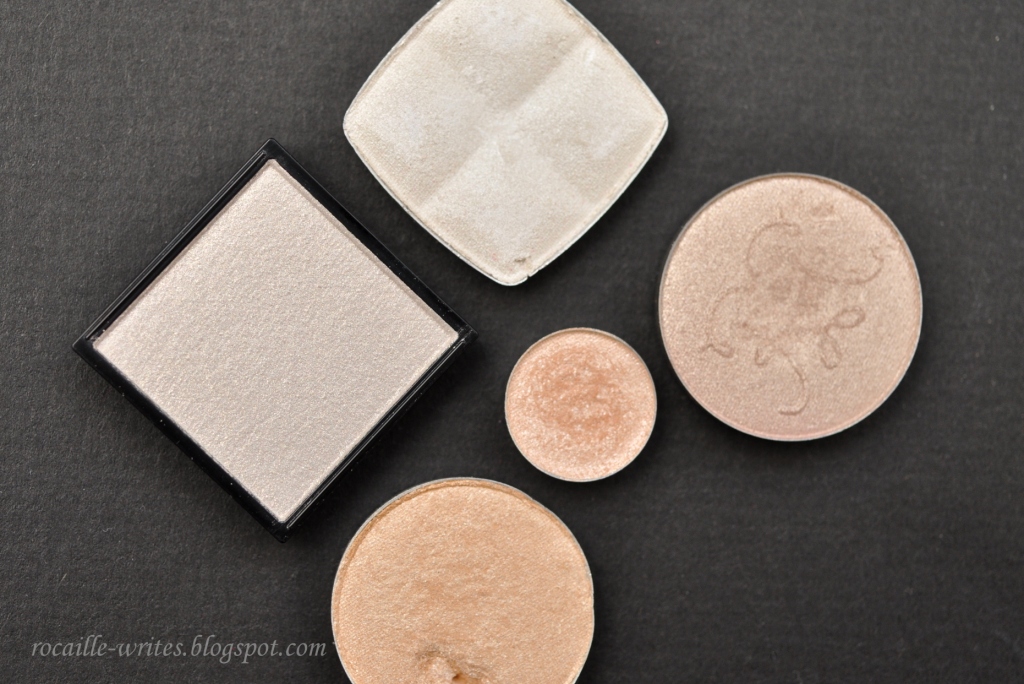 Here's a shade comparison for you, using some of my favorite brightening shades. Hopefully you can see that NYX White Pearl is paler and cooler, while Rouge Bunny Rouge Unforgettable Oriole, Fyrinnae Nijiro and MAC Soft Force are all darker, warmer and more golden. I feel that they're also more reflective than Surratt Scintillante, which has a finer, softer glow. I also took a photo of the first three in full sunlight so you could judge the level of shimmer for yourselves. 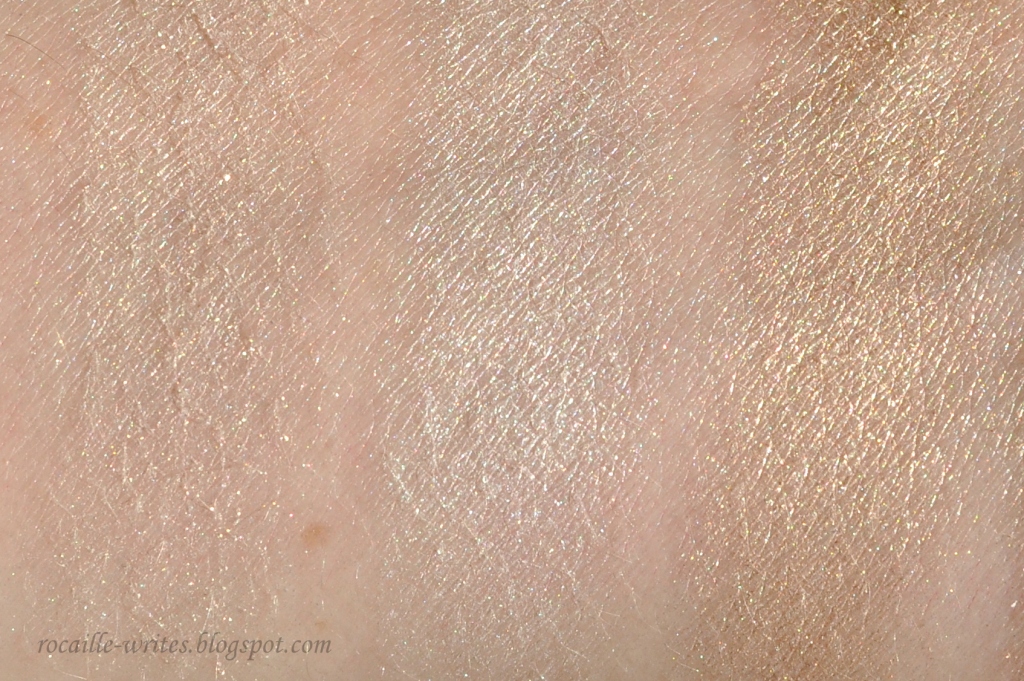 Here's a close-up of my eye look: I used Scintillante in the inner corners and on the mobile lid, with Rouge Bunny Rouge Champagne Pewter Highlight from the Chronos Eye Shadow Palette on the outer third and along the lower lashline, and Clinique Stone Violet in the crease for subtle definition. I think in this photo you can really see the difference in the larger shimmer of the RBR shadow and the soft brightening effect of Surratt Scintillante. 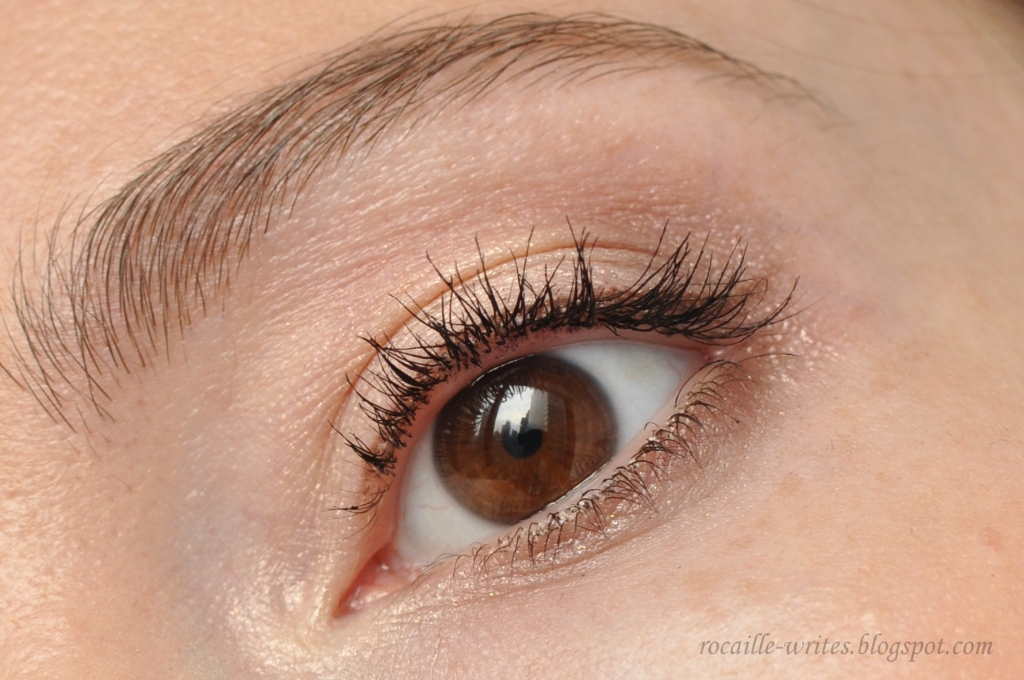 You could say that Scintillante isn't very exciting, and that's true - but for the purpose of effortlessly highlighting the inner corners of my eyes, it's a fantastic shade to have. I also wore it on my 'no make-up make-up' day with just a touch of brown liner to tightline and no mascara, and my eyes looked fresher and more wide awake. Here I'm wearing the eye look described above with Hourglass Incandescent Electra on the cheeks and a touch of fresh Sugar Lip Treatment in Passion on the lips. 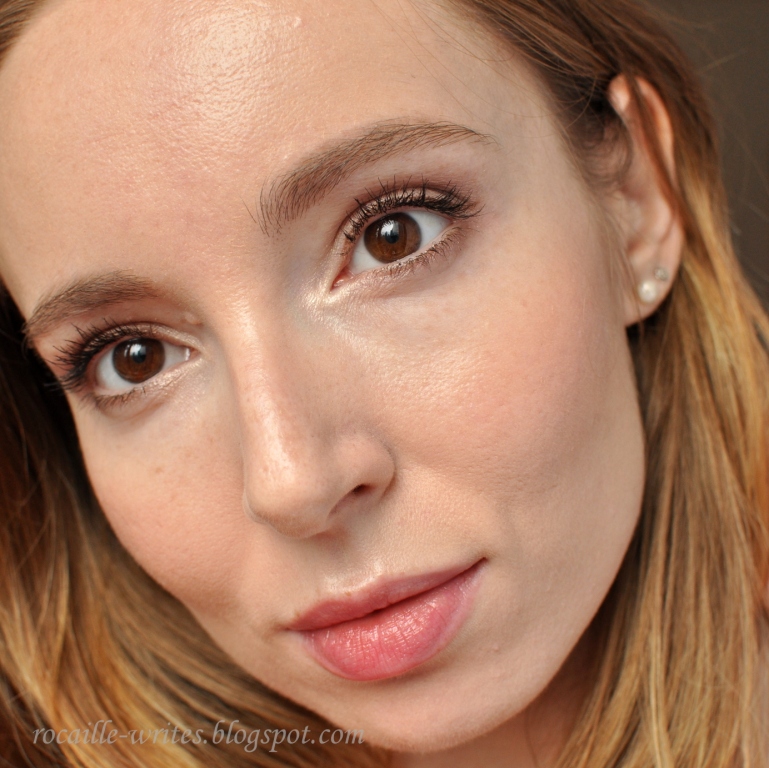 All in all, I'm happy with my purchase, even though Scintillante isn't exactly what I was hoping for when swatched at the counter. I'd especially recommend you check out Surratt's range of eyeshadows if you're a fan of the Shiseido shadow formula. What is your favorite shade for brightening the inner corners of the eyes?