For Fellow Bookworms: My Favorite Books of 2014

I often casually mention here and there what a huge bookworm I am, but I'm quite non-commital when it comes to actually sharing what I've been reading, maybe except for some few and far between library hauls on Instagram. Well, I've decided to put my money where my mouth is and finally pass on some book recommendations - especially fitting now as it's the time of annual 'Best ofs' and some such lists (yes, there IS a beauty round-up coming soon, duh!). Anyway, lo and behold, in no particular order, my favorite books I've read in 2014:
Kristin Cashore 'Graceling' and 'Fire', 2008 and 2009
Fantasy has always been one of my favorite genres in fiction, and these two first books from the Graceling Realm series cement my love and hope in its future. Why yes, these are children/ young adult books. And yes, contrary to many teen reads making the rounds these days, 'Graceling' and 'Fire' are mature both in subject matter and literary means, but more importantly, they're moving, thought-provoking, gripping and relatable. I found the emotional upheavals of the main characters very haunting, in a similar way I've always found Astrid Lindgren's Ronia the Robber's Daughter incredibly beautiful in its melancholy. I'm probably doing a very poor job of convincing you to read these right now, but I absolutely loved them, and I think you would too.

Isabel Allende 'Ripper', 2014
Wait, what? Isabel Allende of magical realism, The House of the Spirits and Eva Luna, has written a murder mystery? I was intrigued too. Both me and Mr read this one and had some bones to pick with the plot at times, but 'Ripper' also has elements I've loved in other mystery books: a precocious child/ teen sleuth character (similarly to the hilarious and lovable heroine of Alan Bradley Flavia de Luce series) and a serial killers' fanatics club who takes on solving the 'Who dunnit' (similarly to Charlaine Harris' Real Murders/ Aurora Teagarden series). In addition, Ripper also features multiple points of view and a curiously matter of fact style of narrative. Maybe not a 'must read', but an engrossing choice for crime novel (and San Fran!) lovers.

Neil Gaiman, 'The Ocean at the End of the Lane', William Morrow and Company, 2013
Am I totally late to the party? Or maybe you too haven't heard that there's a new(ish) Neil Gaiman book out now? Either way, go read it, it's everything we've come to expect from the author, maybe even in a slightly more unsettling atmosphere. 'The Ocean at the End of the Lane' bridges the realms of a short story/ short novel, memories and dreams, the world of adults and the world of children. It paints a beautiful, menacing landscape where things don't always turn out alright in the end, not without grave consequences. Just read it already, you can thank me later.

Donna Tartt, 'The Goldfinch', Little, Brown and Company, 2013
Oooh, Pullitzer Prize winner and shortlisted as one of 10 Best Books of 2013 by New York Times Book Review - are you impressed already? I feel that The Goldfinch has become an Ulysses of the past year, where a lot of people attempt to read it only to get stuck in the first few chapters. I don't think it's entirely fair; not that this is an easy read, but the difficulty lies more in the subject matter than the style of writing for me personally. The Goldfinch features a tragic young hero whom we follow through his struggles and let's admit it, mostly lows, but also some fascinating insights on the art world and the personal meaning of art, similarly to the book I'm going to recommend next. Overall, it's somewhat of a daunting read, but well worth the effort in my opinion.

Susan Vreeland, 'Girl in Hyacinth Blue', Penguin Books, 2000
Not the latest release - but I've actually started with the newer (2012) Susan Vreeland historic art novel, 'Clara and Mr. Tiffany' (also lovely, especially if you're interested in Tiffany's stained glass, early feminist movements and New York City in the 1890s), and worked my way back to 'Girl in Hyacinth Blue' - of which I slightly prefer the latter. This is more of a collection of short stories centered around the common subject of an imaginary Vermeer painting, and the meaning of that work of art in the lives of different people spanning from its creation to modern times. It's not necessarily eye-opening, but I enjoyed the various glimpses into the past and multiple narratives.

Michelle Nevius and James Nevius, 'Inside the Apple: A Streetwise History of New York City', Free Press, 2009
Can you see that strangely meandering pattern in the choice of my reading material? I've always enjoyed reading books set in cities I lived in, and living in NYC definitely has the benefit of a lot of fictitious reading material ('Clara and Mr. Tiffany', 'The Goldfinch', and a notable mention of 'The Golem and the Jinni' by Helene Wecker). But sometimes it's a good idea to build a solid basis of hard facts about your city by way of a history book, especially if you get a lot of house guests who enjoy little anecdotes here and there, but would never actually research anything on their own - can you tell I'm speaking from personal experience of a not-always-willing amateur tour guide? I've paged through a couple different books on NYC history but 'Inside the Apple' was definitely a standout: clearly divided into little nuggets of information, interesting, cross-referencing and comes with several guided walk ideas at the end. If you're a fellow New Yorker or a lover of the city, Nevius' book may be worth looking into.

Jonathan Carroll 'Bathing the Lion', St. Martin's Press, 2014
Carroll is back, baby! If you grew up in Poland in the 90s, you're probably very familiar with this American writer and his books, especially the covers of editions published in the 'Salamandra' series. I was trying to explain to my husband how his books were my favorite growing up, and he didn't remember ever reading one, so I did some digging, and get this: his first book, 'The Land of Laughs', couldn't find a publisher for a long time and was finally published thanks to a famous Polish science fiction writer, Stanislaw Lem, whose son Carroll taught in Vienna. Since then, Carroll's books are published first in Poland and often reference elements of Polish culture, as is the case in 'Bathing the Lion'.

The cover of the American edition likens Carroll's writing to Philip K. Dick, Italo Calvino, Gabriel Garcia Marquez and Kafka. I do agree that 'Bathing the Lion' starts in a magical realism fashion, but then quite unexpectedly takes off in several different directions. It's a bit of a mind bender, and after devouring it through the course of one fine Saturday, my thoughts keep returning to the plot and its possible meanings. I definitely recommend it. If it helps you decide, Neil Gaiman recommends it too. 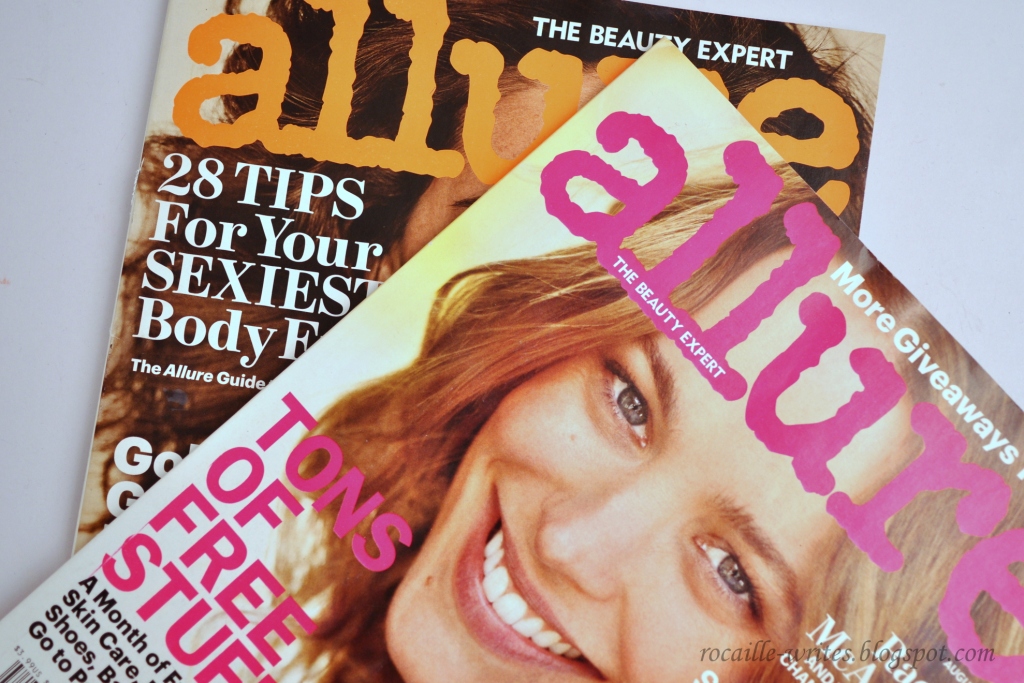 Enough with the favorites, time for the one major unfavorite for this year: Allure 'The Beauty Expert' (quote unquote purely mine) magazine, and women's magazines in general. Here's a bit of background to my story: a while ago, I used to have a yearly subscription to Allure, which I enjoyed, and when that was up and I found a very inexpensive subscription option for six months, I went for it it again. I've always treated women's lifestyle magazines as a very frivolous, brain fart sort of reading material, but with this round of Allure, I've ceased to enjoy it even in that role. I find the topic selection quite boring, the quality of writing sub par, the product recommendations untrustworthy, and overall content light years behind blogs and online platforms.

But get this - Allure probably felt beauty blogs encrouching on their territory, and wanted to appear progressive and generous of spirit, so they launched their own best beauty blogs competition. I am aware that the contest helped some bloggers build their audience and brand relationships (good for them!), but I can't help but feel that Allure is somehow taking advantage of participants to promote their own magazine. In the time of widespread outrage at undisclosed sponsorships, PR samples and hidden commercial content, doesn't it seem kinda convoluted to you that bloggers would be pointing their readers in the direction of a magazine where those practices are everyday bread and butter? Maybe I'm taking quite a radical stance, but either way, I won't be subscribing to Allure any longer, and I'm switching my in-flight reading material to National Geographic these days. What do you guys think - do you still read beauty and fashion magazines?

That big rant aside, I do hope you enjoyed browsing through my favorite reads for this year and have found something that piqued your bookwormy interest. Let me know if you've read any of these and if so, what were your thoughts, but more importantly PLEASE share your book picks for 2014 - I'm forever looking for good recommendations!
Posted by Unknown at 10:05 AM