Just to forewarn you - this post features not only a lot of pregnant lady talk, but also a somewhat creepy 3D ultrasound picture of our baby. But if that doesn't scare you, carry on - and thank you for reading!

As of writing this post, I'm 20 weeks and 6 days pregnant - and as you're reading it, I'm actually 22 weeks and some change, so actually already into my second half of pregnancy. I can't say it has all flown by super fast so far, and not because of any unpleasant symptoms; it's just that the first 14 weeks are rather anxious because of the relatively high risk of miscarriage, and to be honest, I just wanted them to be over and done with and not have to worry about the safety of our baby.

So, big news - at our 16 week initial anatomy scan that my husband accompanied me to, we learnt that we're having... drumroll please... a little BOY! He was not at all shy to reveal his gender and we could actually see it ourselves on the monitor before the ultrasound technician even told us. I had a rather strong feeling from the beginning that it was going to be a boy and we kept referring to the baby as 'he' well before we knew - I was actually so convinced at one point that I began to worry about feeling disappointed if I turned out to be wrong. More importantly, both at the 16 week and the 20 week scan (which I just had yesterday), the baby appeared to be developing well and he weighted exactly as expected - he's 14 ounces now, already twice the weight he was at the 16 week appointment. We saw his little hands and feet, and yesterday I was even able to see tiny fingers and toes. As you can see in the alien 3D ultrasound picture, he likes to keep his hands close to his face - he may actually be sucking a thumb in there for all I know :) 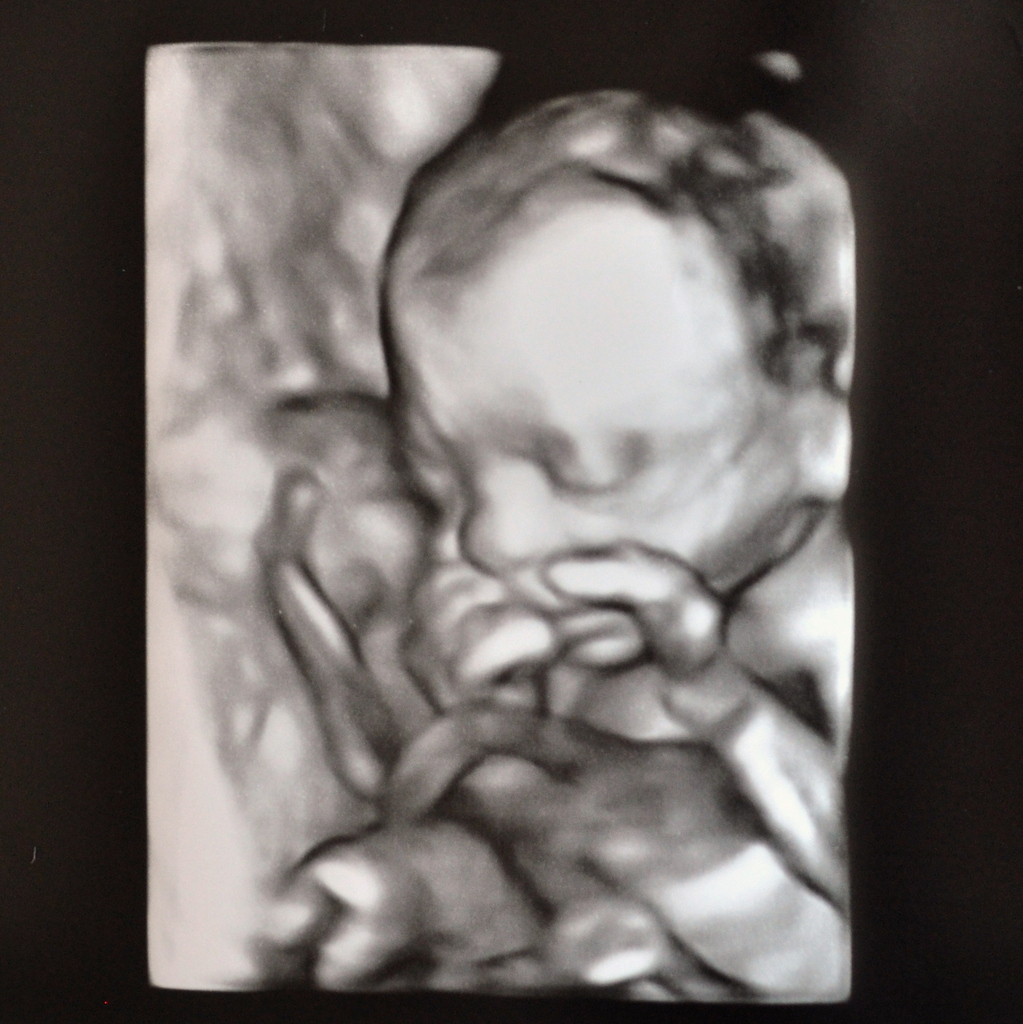 I can also feel his movements a lot more now. I first started feeling some subtle nudges at around 17 weeks, mostly after taking a bath in the evening and relaxing in bed with a book. My ultrasound technician said I have a posterior placenta, so I'm going to feel his kicks and somersaults all the more - and to be honest, now at almost 21 weeks, I think I can even feel them a little from the outside, although attempts to have my husband feel them too have proven futile so far; the boy quiets down as soon as Mr lays his hands on my belly.

Speaking of the belly, it has definitely grown and now looks a lot more like a proper baby bump versus a weird bloat. It's sort of a funny shape - it sticks out a lot in the lower part, which my husband finds especially amusing. It's beginning to be noticeable even to strangers; believe it or not, someone wanted to give up his seat for me on the subway yesterday, and that is not a common occurrence in New York. Because of the larger belly - and to an extent, my boobs as well - I now have to mostly wear the maternity clothes that I purchased so far. We've had a rather cool spring in New York City this year, so that one pair of maternity jeans I purchased from the GAP got lots of wear; some threads have actually started coming loose here and there. Right now, I feel that we're rapidly moving towards summer weather, so my maternity dresses and shorts are starting to be indispensable.

But other than the larger belly that sometimes gets in the way - especially when I'm bending over picking this up, or trying to polish my toes - I've been feeling pretty great. I have a lot more energy than in the first trimester, and especially in the mornings I can get a lot of things crossed off my to-do list. I do have to get up about 2 times at night to go to the bathroom, and then the third time in the morning, somewhat earlier than I would have liked to wake up, but all in all, I feel quite rested. I do sometimes get what I believe doctors call 'round ligament pain' - sharp pains at the sides and below my belly when I'm moving around a lot - but they subside quickly and are nothing to worry about; it's just my uterus stretching and things rearranging themselves to accomodate the growing baby.

In other news, we're leaving for a 2-week holiday tomorrow, and I couldn't be more excited! We're finally going to visit Iceland (this post is being scheduled in advance, so we're already there and enjoying our trip!). It's been on our bucket list for a couple years now, and we decided to go this spring/ summer even before we learnt about my pregnancy, although we booked the trip about a month earlier than we were originally planning to so that it'll be easier for me to fully enjoy it. It's not really a babymoon; to be honest, Iceland is probably not an ideal destination for a pregnant woman, and we didn't foresee this trip as our last holiday as a family of two - but when I thought about it, this is the first longer vacation just for me and Mr (without the rest of our families) since our honeymoon 7 years ago. Our plan is to rent a car and drive all the way around the island, staying in a different town nearly every night and exploring the great Icelandic outdoors. There is going to be mostly driving, hiking and taking lots of photos, which I'm hoping to share on my Instagram. However, we're going to take it all pretty easy and allow plenty of time for relaxing, dining out and bathing in geothermal waters; in fact, our first stop after the flight to Reykjavik is the Blue Lagoon Spa.

I think that's all I wanted to say for now, but if you have any questions - be it pregnancy or Iceland-related - don't hesitate to ask! I'm sure you're wondering if we already have a name picked out for our little boy, and we do in fact have one strong contender - but I'm going to be a tease and keep it a secret until he arrives in October. Thank you for reading!
Posted by Unknown at 10:08 AM