At long last, the time has come for the finale of my 2016 Project 13 Pan! I'm wrapping up this challenge a few days early because I have another panning finale coming up, and I wanted to space them apart a little - and truth be told, I'm SO done with the products in this project. But let's not get ahead of ourselves here; if you haven't seen my introduction post and the halfway update, you can do so here and here.
Now, are you ready to see my final progress? 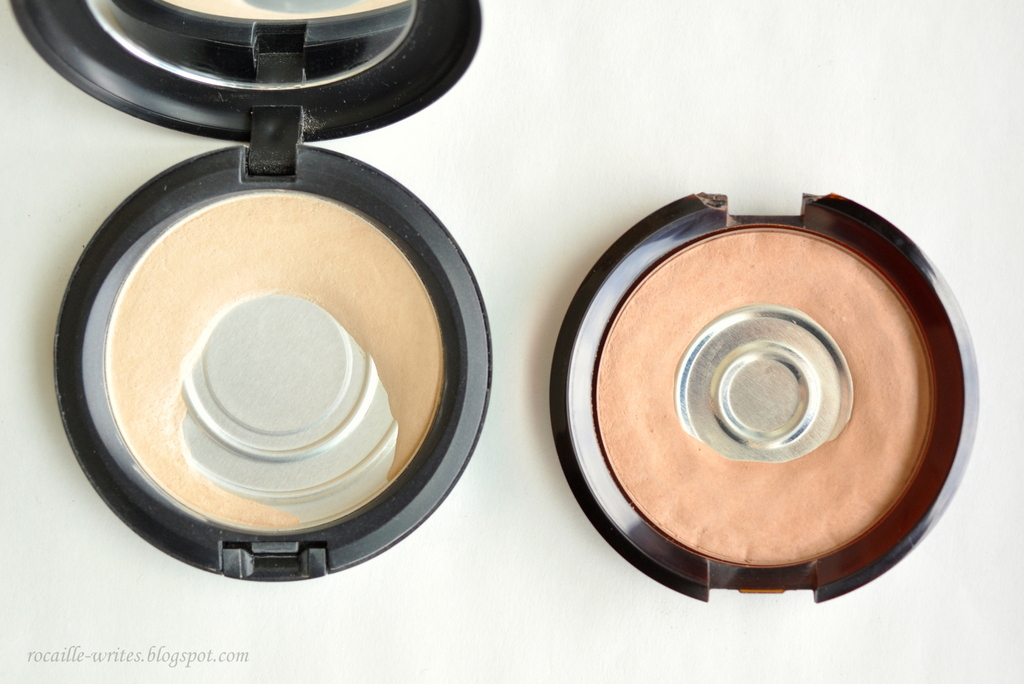 1. MAC Blot Powder in Medium. My initial goal for this Project was to use up what was left of this powder after working on it for 6 months last year in a Project 10 Pan (here). As you can see compared to my last update, I have again made decent progress, but I'm nowhere near finishing the whole compact. Basically, the amount of pan that you see now is the result of 10 months of very regular (probably 5 times a week) usage. I definitely feel a little sick of it after using it for so long, so it's going back in the drawer for now and I may reassess at the end of the year whether I want to keep or get rid of it.
2. The Body Shop Honey Bronzing Powder in 02 Fair. I haven't set a strict goal for this product because already at the start of the Project, I was aware of the fact that it would be impossible for me to use it all up. I was right - obviously - but I'm quite proud of my progress. However, using a bronzer daily has made me realize I'm not a huge fan of bronzing and it's not an essential part of my make-up routine, so I'm getting rid of what's left of this battered bronzer and won't be rushing out to purchase a replacement (I have two more bronzers left in my collection). 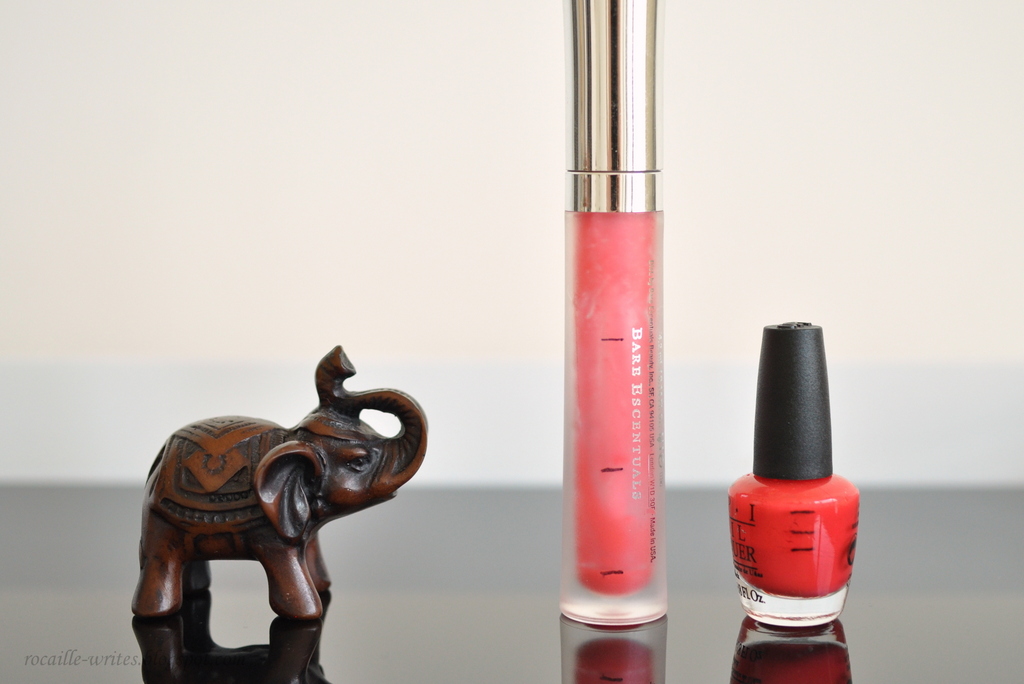 3. Buxom Full-on Lip Cream in Cherry Flip (review with swatches). Full success, it's completely used up! While the Full-on lip gloss formula from Buxom is one of my absolute favorites, I won't be purchasing another bright/ more pigmented shade for a while - I just prefer sheer lipsticks or tinted balms for that more subtle pop of color.
4. OPI Nail Lacquer mini in Red Lights Ahead... Where? Even though it looks like there's still about less than a half left in the bottle, this nail polish has now gone completely thick and stringy, AND (that's the kicker, you guys) the brush doesn't reach all the way down the bottle (!!!). On my last mani, I was only able to coax out one coat from it. I enjoyed the shade, but I don't do well with wearing the same color on my nails repeatedly for a few months. 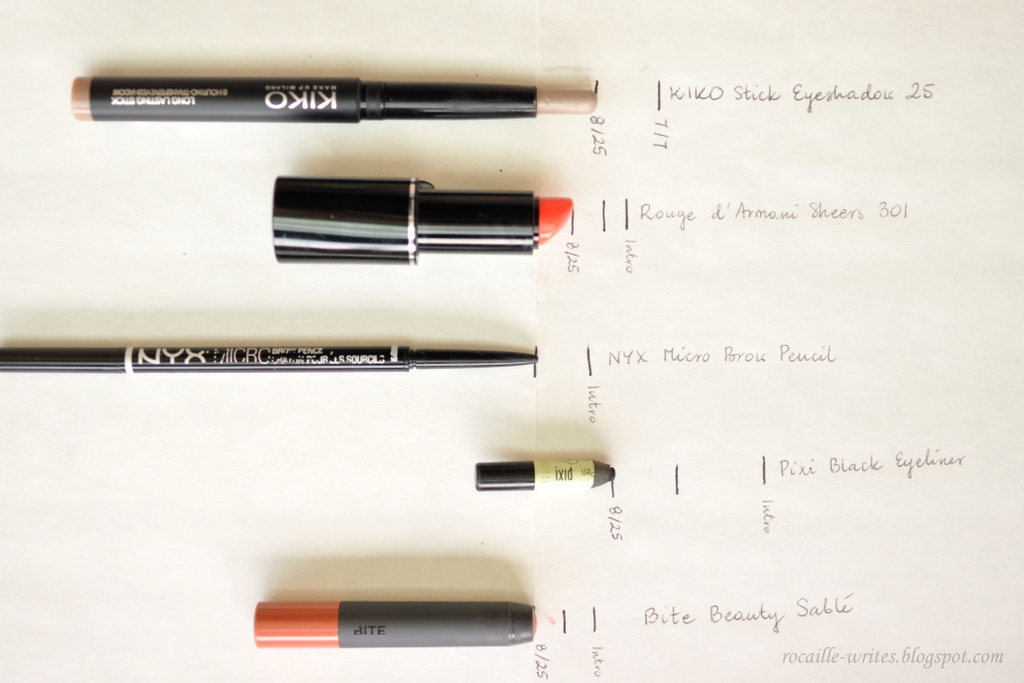 5. Giorgio Armani Rouge d'Armani Sheers in 301 (review with swatches). I was working really hard to get this lipstick all used up but I didn't quite make it; the firmer formula makes the progress pretty slow. However, I only have a little stub left now, and I'll do my best to have it finished by the end of the year.
6. Bite Beauty High Pigment Lip Pencil in Sablé. From the three lip products I included in this Project, this was the easiest one to use up. I really enjoyed this Lip Pencil but I'm glad that I resisted the temptation to get a back-up (a friend kindly offered to sent me hers that she decided to purge), because I'm now more into somewhat deeper mauve shades on the lips - more along the lines of Bite Lip Pencil in Rhubarb that was also included in the same Holiday kit.
7. Pixi Beauty Endless Silky Eye Pen in Black Noir (review with swatches). I used it all up with about a month to spare and after I've moved on to my other shades of the Pixi liners, I definitely think the Black was getting pretty dried out. I liked it, but unfortunately this always smudged when I tightlined with it, and sometimes even on the upper lashline, which is something I don't experience as much with other eyeliner colors from Pixi. I'm now using an old pot of Clinique Gel Eyeliner in Black and so far, I'm liking it much more for both my lashline and waterline.
8. NYX Micro Brow Pencil in Taupe (review with swatches). All finished at the halfway update (here). It's a good product, but I want to try the Hourglass 'Arch' Brow Sculpting Pencil, hoping it'll be quicker to fill my brows with. 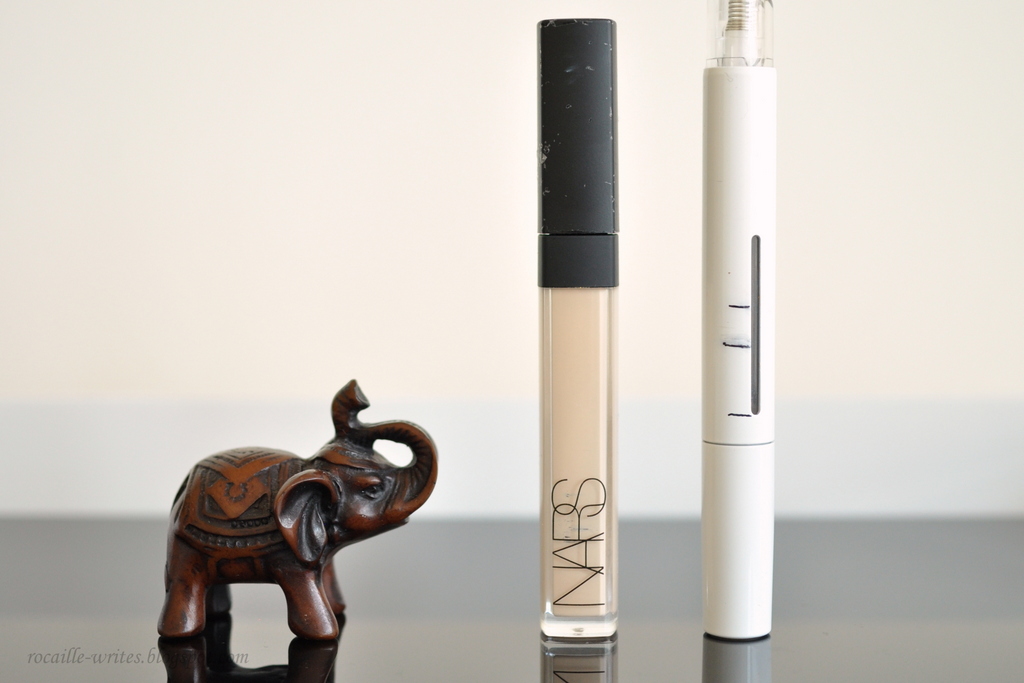 9. Laneige Cushion Concealer SPF30 in Light* (review with swatches). To be honest, in the last two months of this Project I just couldn't wait to finally be done with it. This is a light to medium coverage concealer that NEVER sets - but somehow can still look cakey under the eyes at the end of the day. I'm really glad this is leaving my stash now.
10. NARS Radiant Creamy Concealer in Chantilly. In all fairness, I did say in my Intro that I didn't think this concealer would be all used up by the end of the 4 months. I've done some more progress on it but it's still nowhere near finished. I keep going back and forth on what I should do with it now - it's pretty old at this point (over 2 years of pretty much daily use), I don't like it all that much anymore, and I have unused back-ups of concealer in my stash; but on the other hand, the shade matches me really well in the winter and uhm, it was rather expensive. I may just keep it until the end of the year and see if I can use it some more. 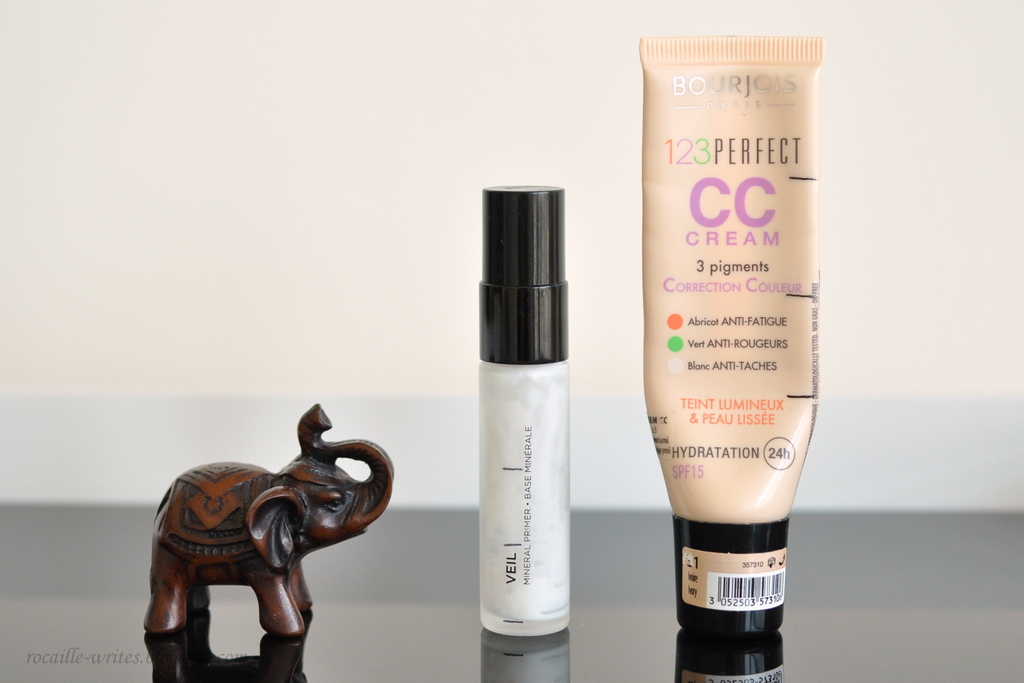 11. Bourjois 123 Perfect CC Cream in 31 Ivory (review with swatches).  My goal was to only have 1/4 left in the tube at the end of the Project and I succeeded in doing that - I actually think there's less than that left in it now. I'd like to keep on using the remainder and have this all finished by the end of the year.
12. Hourglass Mineral Veil Primer (review). All used up, including scraping out the last little bits by unscrewing the pump. It was alright as a primer but I wouldn't repurchase it, or another face primer for that matter - at least for a while. Again, not an essential step in my routine and I have one more deluxe sample of another primer left when I occasionally feel like using it.

13. Maybelline Color Tattoo in Just Beige & (bonus) KIKO Eyeshadow Stick no.25 (progress shown on the card above). My goal was to use up half of the Color Tattoo, and I'm estimating that I roughly managed to do that. However, after about a week from my last update, I grew so frustrated with how dry it looked on my lids that I decided to replace it with the KIKO Eyeshadow Stick as my eye base. I'm glad that I did - not only did I like the KIKO so much more, but I also managed to use up more than a half of it. I'll continue reaching for the KIKO stick and I'm hoping to have it all used up within the next couple months.

Overall, I'm evaluating my succes with this Project at 10 out of 13 (counting the two eye bases as one full product used up), or 77%. That's quite alright, I think - I can't see how I could have done any better on it in terms of my committment to using these products, which was probably 99% of the time I wore make-up in the past four months. I actually have a lot more thoughts on panning make-up in general after completing this Project, but I think I'll be writing them all down in a separate post in the very near future, so stay on the lookout for that.

How are you doing on your Project Pans? Have you already switched to a different seasonal (fall) Project? Please link your update posts in the comments, I love looking at your progress!
Posted by Unknown at 10:02 AM