As you know, I'm getting married in September in a lovely, nineteenth century palace near Warsaw. Or, should I rather say, the wedding itself will take place in a neo-gothic church and the reception will then follow in the palace and the old park that surrounds it.

The venue, of course, has a vintage (or even historic) feel to it, but I had been wanting a retro dress even before we found it. In fact, it's quite a funny story :) You know how you usually browse through hundreds of wedding dresses' catalogues, find that unique one, go to a store where they have it, try it on and it looks just horrible on you?

Well... This is not my story :)I'd found my perfect dress in a catalogue like 5 months before even thinking about going to a store, and when we finally went dress hunting, it was the last one that I tried on and I promised myself not to try on anymore. And... it looked perfect, even another client complimented this particular gown saying I looked like a fairy. Here it is: 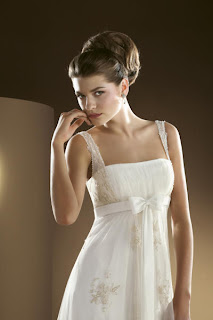 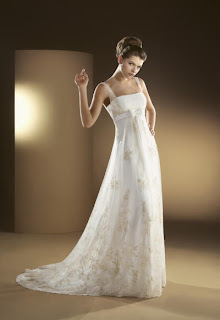 It's from a Spanish company called Lugonovias, which means I have to wait 3-4 months before they send it to Poland...

Anyhow, since it is such a Napoleonic/ Empire silhouette, I was wondering what kind of make-up look and hairdo would go nicely with it. As far as hair is concerned, I've found a hairdressers' manual containing history of hair, and it says that empire hairstyles were very feminine, with locks of hair pinned up to the scalp. Just like in a Polish film "Pan Tadeusz", based on a XIXth century book and featuring lots of examples of the Empire style: 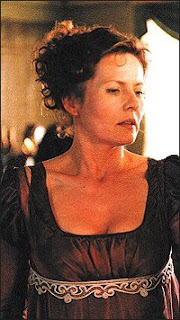 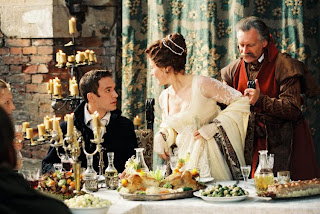 This photo of Gladys Cooper, an Oscar-nominated English actress, offers a different solution: 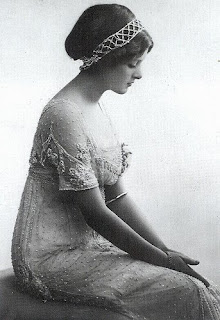 Still, I haven't found any information as to the Empire make-up. Judging from various paintings, the complexion was usually very pale with a very bright, pink blusher on the cheeks and quite accentuated lips. Personally, I will probably go for a subtler look with the emphasis on the eyes instead of lips. What would you suggest?
Posted by Monika @ RocailleWrites at 8:33 PM