My Project 5 Pan isn't going quite as well as I expected and for a very simple reason. I'm having a school break and I'm mostly staying at home, which means going bare-faced most of the time. So, no make-up is being used up, not only the items nearing their drawer life... 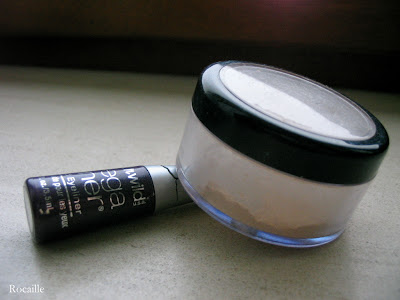 I did manage however to tick the following items off my list: Wet n'Wild Megaliner in Plum as well as MaxFactor 2000 Calorie curved brush mascara. Both of these are far too dry to use for any longer. I didn't enjoy using the mascara too much; I thought it was just ok but have noticed no particular curling action. I did like the liquid liner though; the pigmentation could have been better, but I really liked the thin brush it came with which made the application very easy and even. In the photo you can also see my Coastal Scents mineral foundation with 2-3 uses left in it. So the total will come up to 3 items used up, 2 more items to go.

As for the post's mysterious title, no it doesn't refer to the state of my skin, it's something much more interesting, as you'll see below... Some nations celebrate the end of carnival by dancing samba, others by wearing masks and amazing costumes, but Polish people feast in the best way possible: we eat pastry, and lots of it. 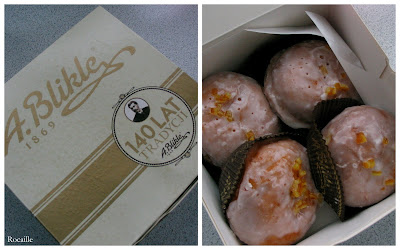 So the last Thursday of carnival in Poland is called the Greasy Thursday (Tłusty Czwartek). Apparently in the past the feast extended to a whole week and our ancestors would drink litres of vodka and stuff themselves with meats such as bacon, hence the name; nowadays, the whole country is enjoying these little beauties; they're called pączki (singular: pączek [ponchek]) and the closest counterpart for you, English speaking peeps, would be doughnuts. The dough for pączki is slightly different though and they come with various fillings, usually of jam, the most classic one being rose jam, and they have icing and candied orange peel sprinkled on top. The depicted ones come from a famous Warsaw confectioner, Blikle; this family has been in the business since the 19th century, so if you happen to be in Warsaw, I strongly encourage you to check their stores out!

I'll leave you now, happily dreaming of pączki, and have a great end of the week!
Posted by Monika @ RocailleWrites at 3:12 PM