Oh, Rouge Bunny Rouge Raw Garden Eye Shadow Palette in Chronos ($59 for 0.355 oz/10 g, available on beautyhabit.com in the US), you're a thing of beauty. I included a little teaser about this Limited Edition palette in the Fall 2014 Beauty Wishlist post and some readers were interested in my thoughts on it, so I'm trying to be good and churn out my review before the product actually sells out. And yes, that did happen in the past. I still went ahead and posted about a discontinued product. Ahem. Moving on. 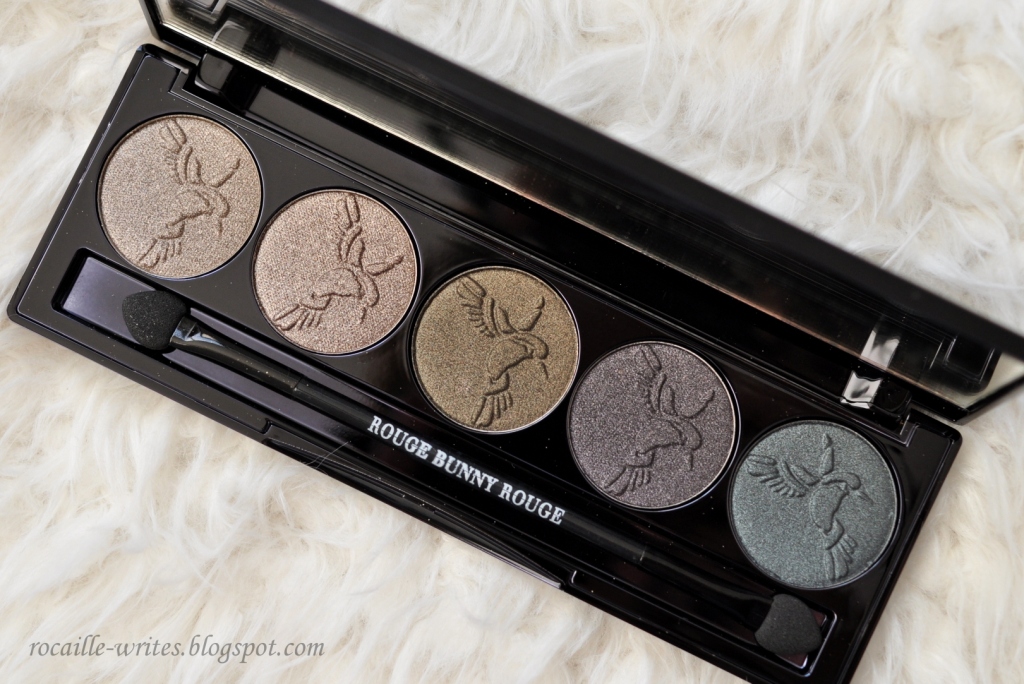 The Raw Garden Eye Shadow Palette in Chronos features five all new shades in a plastic compact. The product comes packaged in a cardboard box, which mirrors the flowers & hummingbirds design of the top of the compact. Now, the fact that this first ever eyeshadow palette from Rouge Bunny Rouge seems to have an actual shade name (Chronos) vaguely suggests that maybe there are other colorways in the works; pretty please, RBR? 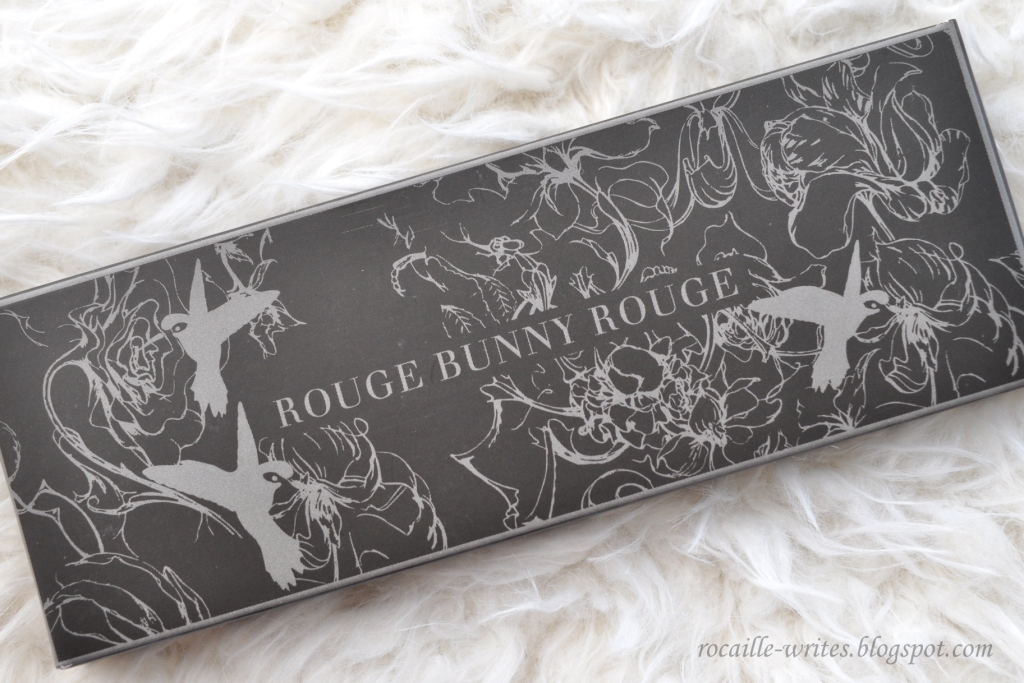 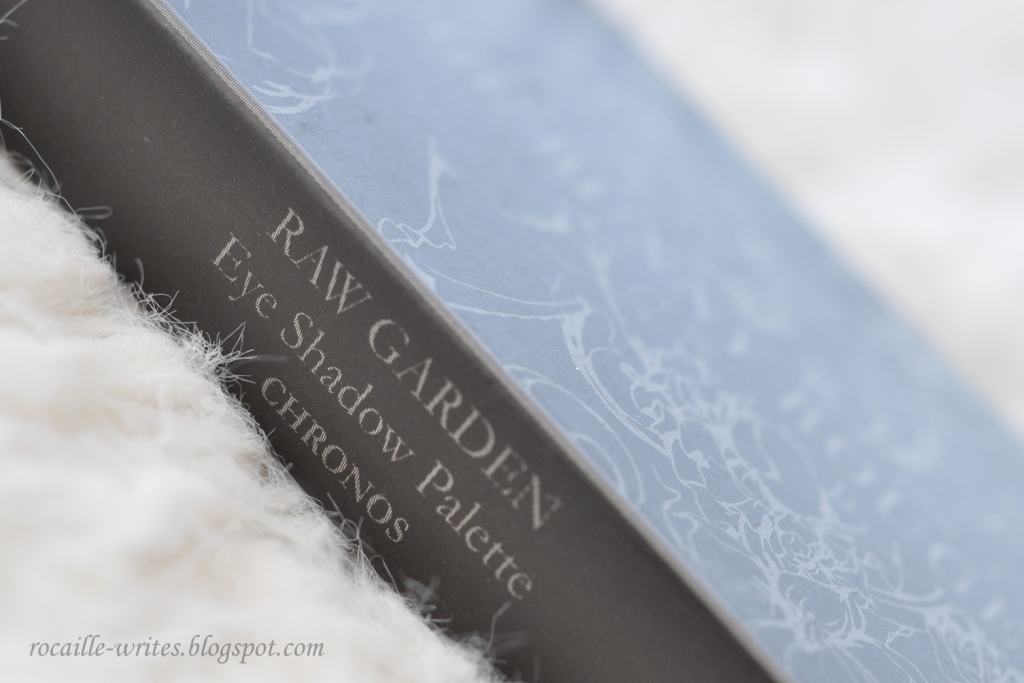 The most amazing and unique feature of the actual compact is that it's magnetized and refillable; as you can see in the photo below, there are pin holes on the back of the palette which you can use to remove the pans from the compact to store in a different palette, or to store other RBR eyeshadow refills in the compact. The pans in the Chronos palette are the exact same size as regular individually sold RBR refills. As for the quality and feel of the actual compact, I wish it was a bit more luxurious: the plastic looks a bit cheap and the beautiful design on top doesn't stand out as much as I would like it to. On the upside, the palette is very lightweight, doesn't scratch easily, and has a large mirror on the inside - all those features would be very handy for travel. 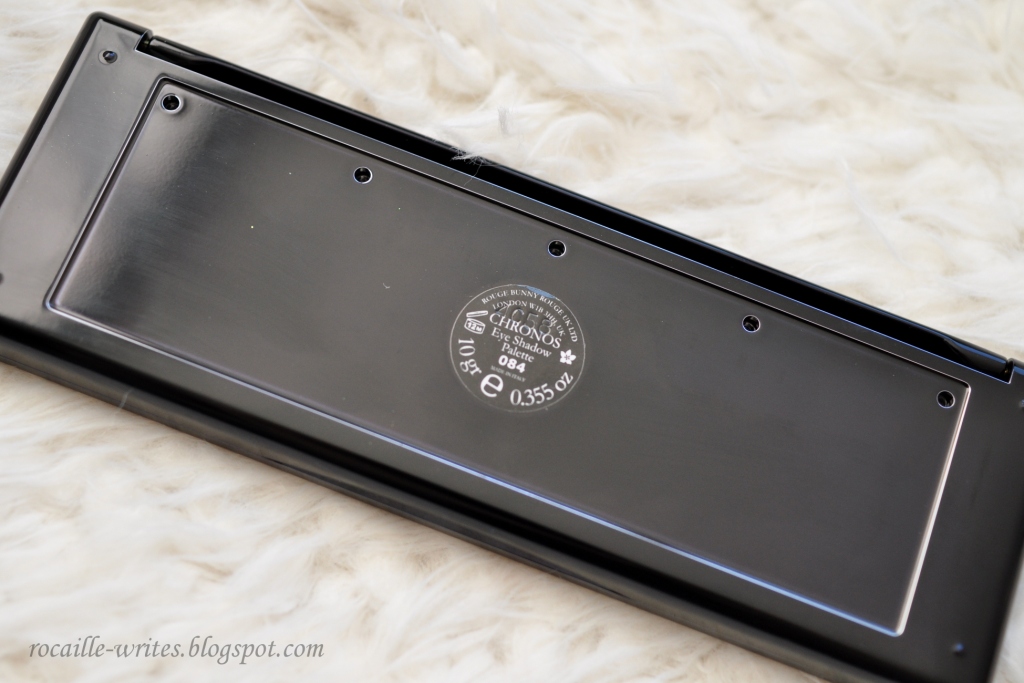 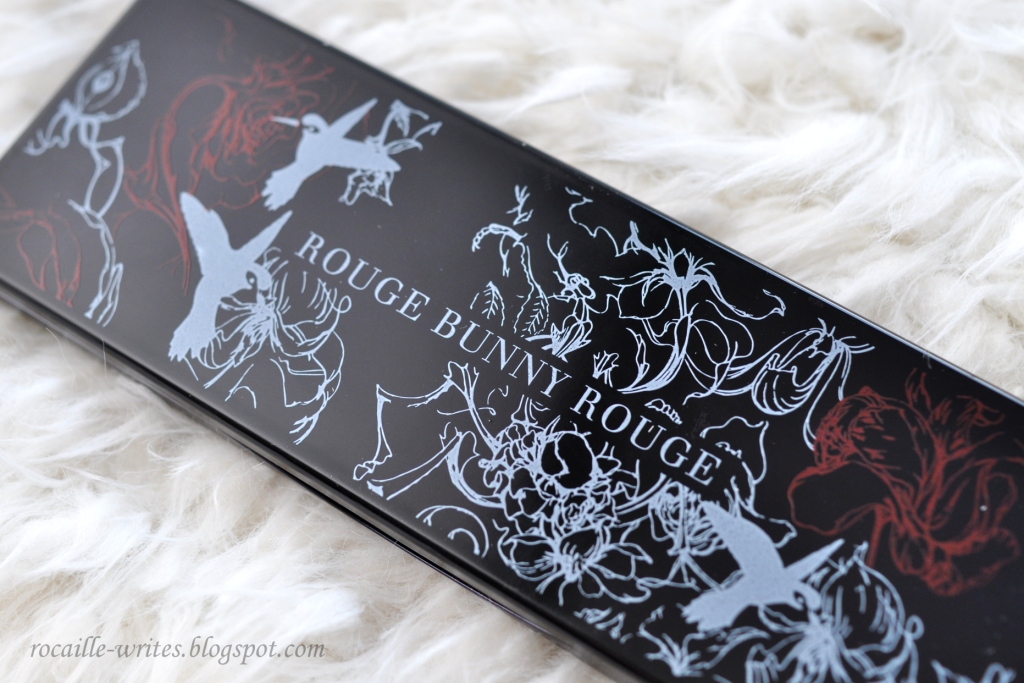 However, while all these packaging considerations are important and noteworthy, it's the inside that really counts - am I right? Let's to the typical Rocaille Writes in depth shade analysis and comparison, which is not only time-consuming, overly verbiose and nit-picky, but also probably useful to... well, no one. No, I know you all secretly love it. If not - indulge me. 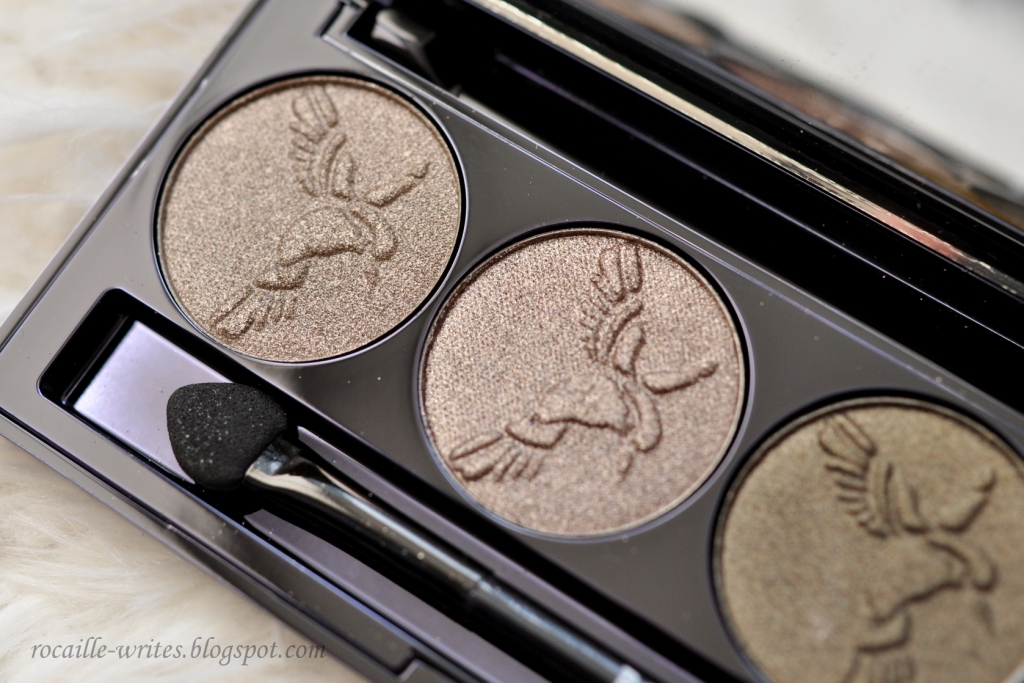 The first two shades from the left, Champagne Pewter Highlight, described as a peachy metallic champagne, and Metallic Rosy Brown, described as a peacock pink and gold shade, look deceptively similar in the pan but swatch very differently on the skin. While I usually find RBR shade descriptions to be pretty spot on, these are rubbish - and why no pretty birds' names on these shades? :( At any rate, both of these shades lean cool and have a high shimmer/ metallic finish - when picked up with a finger, they seem to almost have a foiled effect. 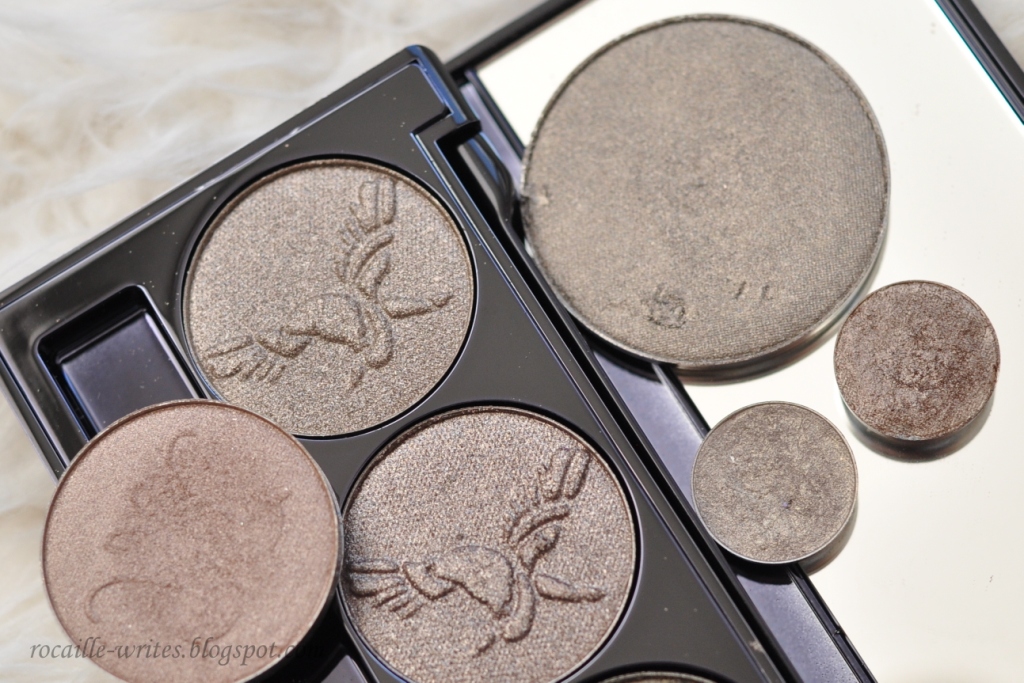 The Champagne Pewter Highlighter, a mid-tone platinum beige, is lighter and slightly warmer of the two, while the Metallic Rosy Brown is a muted taupe leaning purple and grey. In the arm swatch, you can see that compared to RBR Bohemian Waxwing, both of these shades are significantly cooler and more reflective. Fyrinnae Feisty Fennec Fox, swatched on the far right, comes pretty close to Champagne Pewter, but I don't have a good dupe for Metallic Rosy Brown. 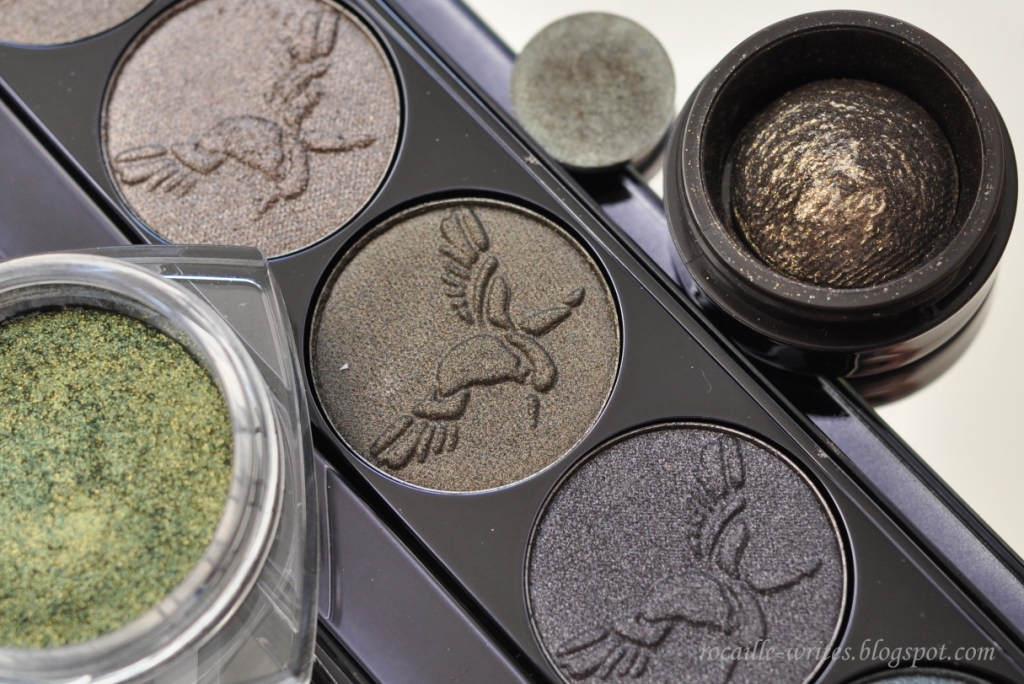 Aged Bronze, the middle khaki brown shade described as an interchanging, cool olive metallic, is my unexpected favorite of this palette. Now, on my skintone and to my eyes, this shade isn't cool-toned and it isn't metallic. I'd describe it as a darker warm brown leaning yellow green with a luminous/ low shimmer satin finish. If you look closely in the palette close-ups, you can tell that this shade (and Midnight Blue Gunmetal on the far right) have a different texture in the pan than the other three shadows, which also reads as a different finish on the skin: smoother, less reflective but not flat by any means. I'm very happy that Rouge Bunny Rouge included two different finishes in this palette, as it's very difficult to build a well-balanced look using just metallic shadows. Aged Bronze and Midnight Blue Gunmetal give a lot more textural variety to the Chronos palette. 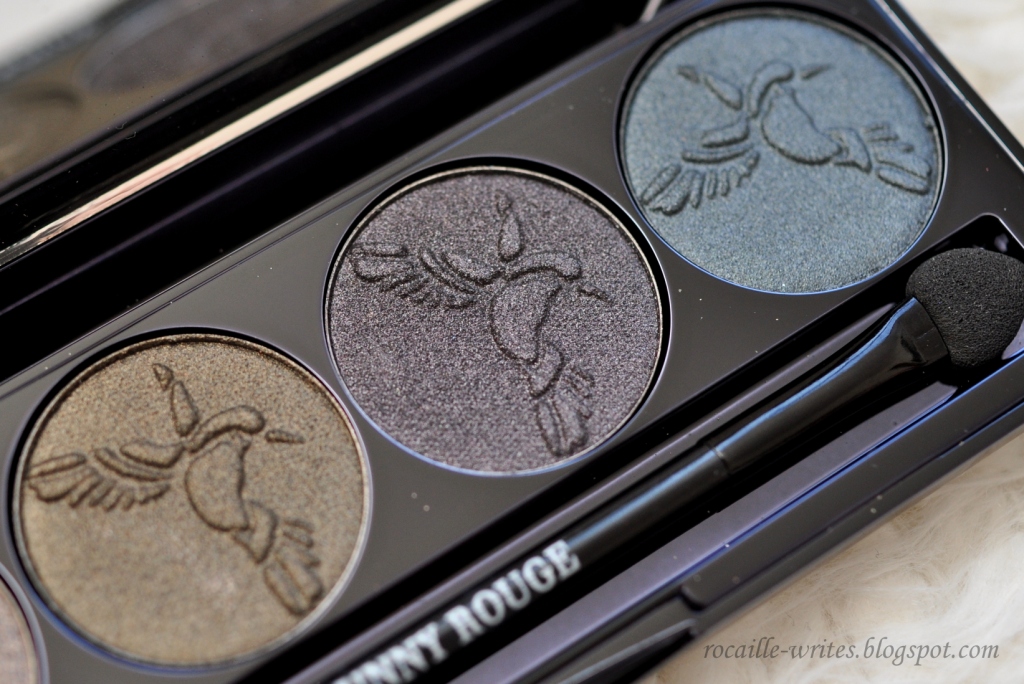 Now, the last two shades on the right, Aubergine Gunmetal, described as a dark, gold-tinged eggplant grey metallic, and Midnight Blue Gunmetal, described as a deep, smoky blue-grey metallic, conversely to the first two shades, are deceptively different in the pan but swatch very similarly on the skin. I have to say that Aubergine Gunmetal is my least favorite shade in the Chronos palette: upon swatching, I lose nearly all of its purpley undertones and instead I'm left with a shimmery charcoal. This shade has the same multidimensionl metallic finish as the first two but unfortunately suffers from the same major drawback as the Metallic Rosy Brown: there's a lot of fallout. The first time I used this shade I did my base first, and my entire under eye area and tops of my cheeks were covered in charcoal specks after I was done packing on this eyeshadow on the lids - imagine my disappoinment! 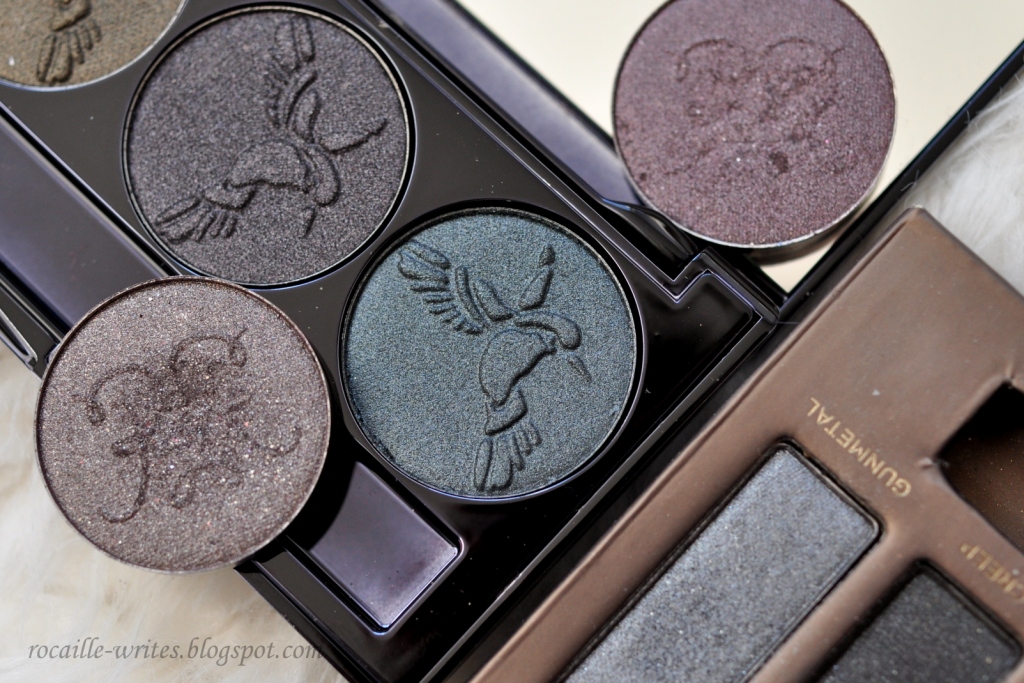 Midnight Blue Gunmetal is a satin gunmetal shade with navy/teal shift. It has the same smooth, luminous finish as Aged Bronze - there's less shimmer and more sheen to these two. In the comparison swatches below, you can see that Aubergine Gunmetal is a darker, more charcoal cousin to RBR Eclipse Eagle, while Urban Decay Gunmetal is lighter, more metallic steel than Midnight Blue Gunmetal. The Rouge Bunny Rouge interpretation of a gunmetal shade is a lot prettier and more complex than the UD!
Now for the look: I decided to do a simple smudgy cat eye using Champagne Pewter Highlight all over the lid and in the inner corners, with Aubergine Gunmetal smudged upwards on top of a black eye pencil (Pixi Endless Silky Eye Pen in Black Noir). You can see that on my eyes, Aubergine Gunmetal leans blue, and brings out the warm tones in my eye color. As mentioned above, I've had fallout issues with both Rosy Brown Metallic and Aubergine Gunmetal, but apart from that, all five shadows in the Chronos palette are pigmented, silky smooth to the touch and blend out easily. The three metallic/high shimmer shades need to worked into the skin more (as opposed to patted on) to achieve a smooth finish, so perhaps a blending brush would be preferrable to a flat shader when working with these. 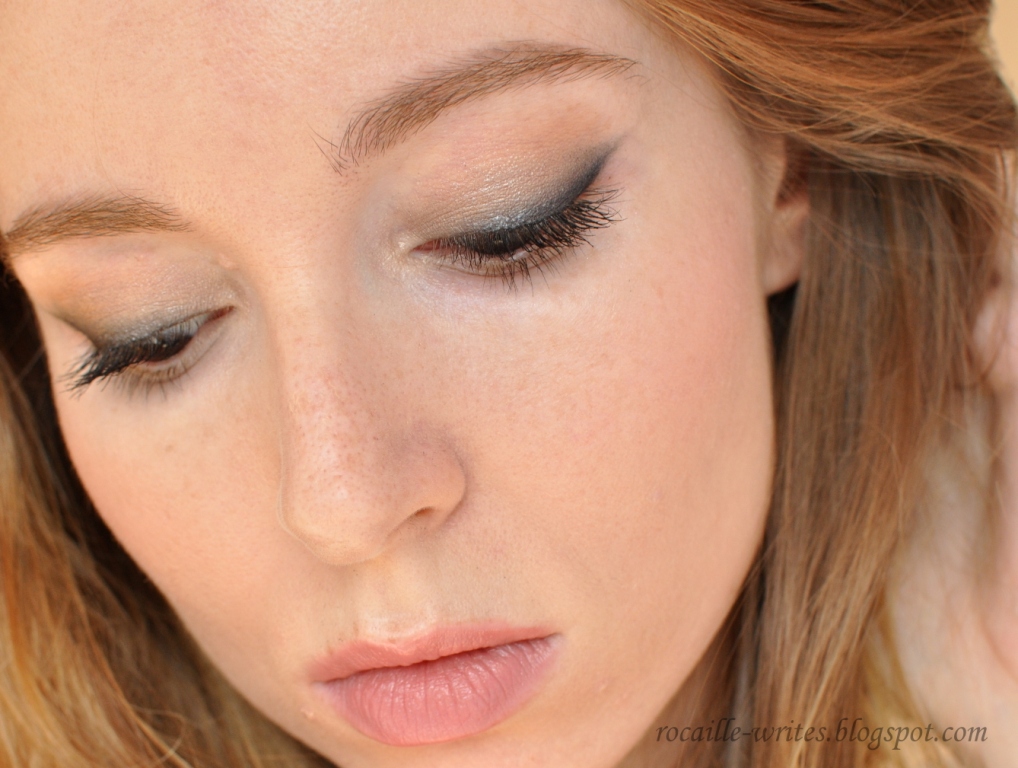 You can find a lot of placement suggestions for this palette on the Rouge Bunny Rouge website (no, seriously - A LOT). As for my final thoughts: I'm glad that I bought the Raw Garden Eye Shadow Palette in Chronos and I find the shades within really complex and beautiful, but I've had such high expectations for it that inevitably, some aspects of it fall short for me. I do think the compact could have a bit more of a high-end feel, but more importantly, I'm quite annoyed at the amount of fallout on the Rosy Brown Metallic and Aubergine Gunmetal. I also believe that in terms of shade selection, there could be more of a difference between the two Gunmetal shades, and wish the palette included one lighter shade I could use as a highlight; on my fair skintone, Champagne Pewter Highlight is definitely more of a medium-depth shade.
One thing I haven't experimented with quite yet is using these shadows wet - they're a wet/dry formula, and most likely using the shades that are prone to fallout wet would mitigate a big part of the problem. However, that's true for all eyeshadows, high and low end, and since I rarely use my eyeshadows wet, I mostly wanted to see how the Chronos palette performed with my usual techniques. Have you tried this palette from Rouge Bunny Rouge? If not, are you thinking of picking it up any time soon?
Posted by Monika @ RocailleWrites at 10:30 AM