Uhmm, no, not done with glitter quite yet, my dears. I will admit that I went through a difficult phase of glitterophobia about two years ago - any glittery make-up product I touched would either leave my lips dry and gritty, or form a trail of sparkly dandruff all over my cheeks, and was always, always, an absolute b*tch to remove. But I'm over my fears now, as you may have deduced from my last nail-centered post: I've found glittery make-ups that WORK. Well, I do still avoid glitter on the lips though. 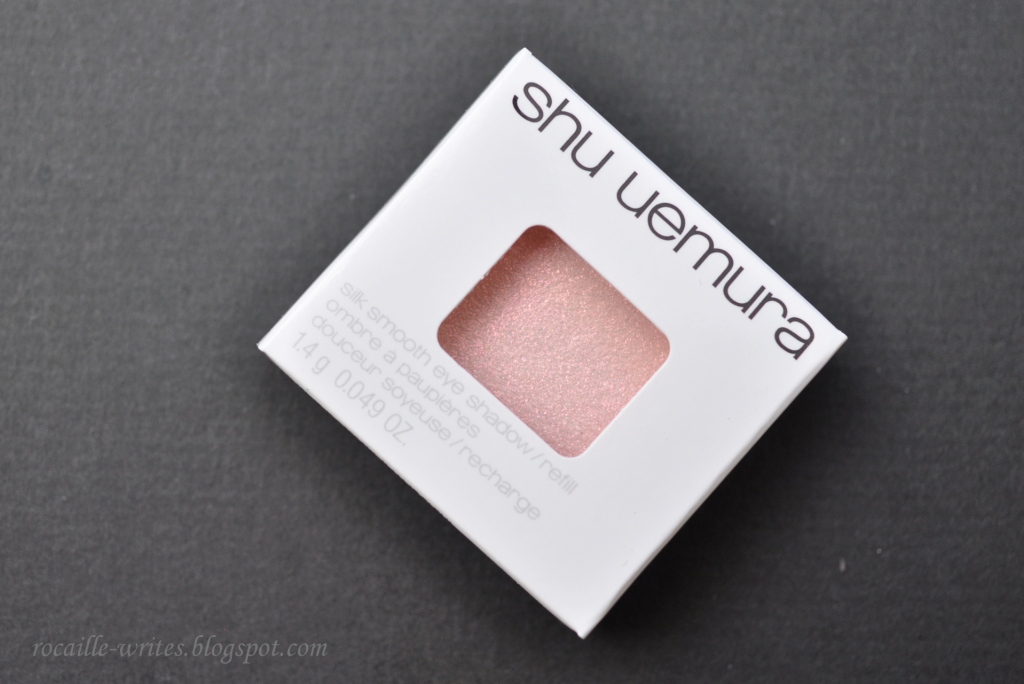 So let me present a perfect example of a glitter that works: Shu Uemura Silk Smooth Eyeshadow Refill in IR(idescent) Pink 115 ($15 for 1.4 g/0.049 oz), another stellar recommendation from Driveller Kate. Here's what Shu's IR Pink 115 is and isn't: it IS a fine fiery opal glitter, shifting between pink and orange, and it IS NOT a pigmented base with some chunky glitter thrown in for added interest. Iridescent Pink 115 is meant to be a glitter topper, to be layered with another, more opaque shadow underneath - very much like many other glitter eyeshadows from Asian brands. 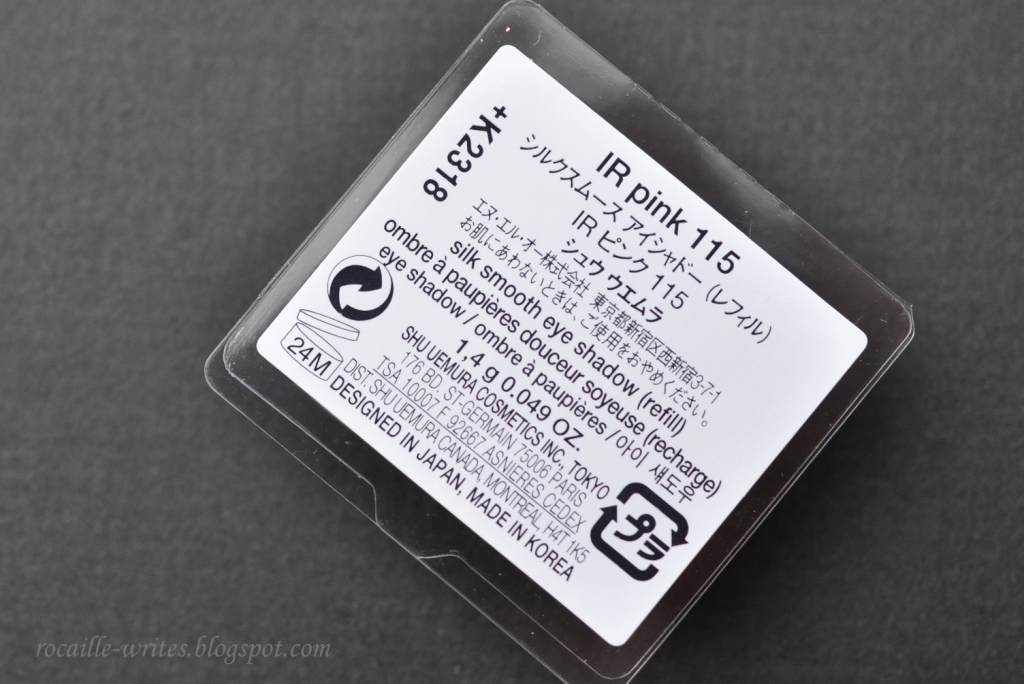 WHICH is also the reason why Shu's Iridescent Pink turned out to be nearly impossible to photograph accurately. But, instead of giving up completely, I thought I could at least try to show you a textural difference between some other glitter eyeshadows in my collection as well as a satin finish transforming shadows from the recent Shiseido release. I hope that in the arm swatch, you can see that Shu's IR Pink 115 is very similar in texture to the glitter shade in Visee Bitter Brown quad, and very much texturally different from something like Too Faced Nude Beach eyeshadow from the old Natural Eye palette (another example: Urban Decay's Sidecar shadow from the first Naked palette). Shiseido's Static trio is a similar concept to Shu's glitter, but a luminous satin finish instead of glitter. Shiseido's shadows can also be used alone without the need for layering, since they do have a colored base. 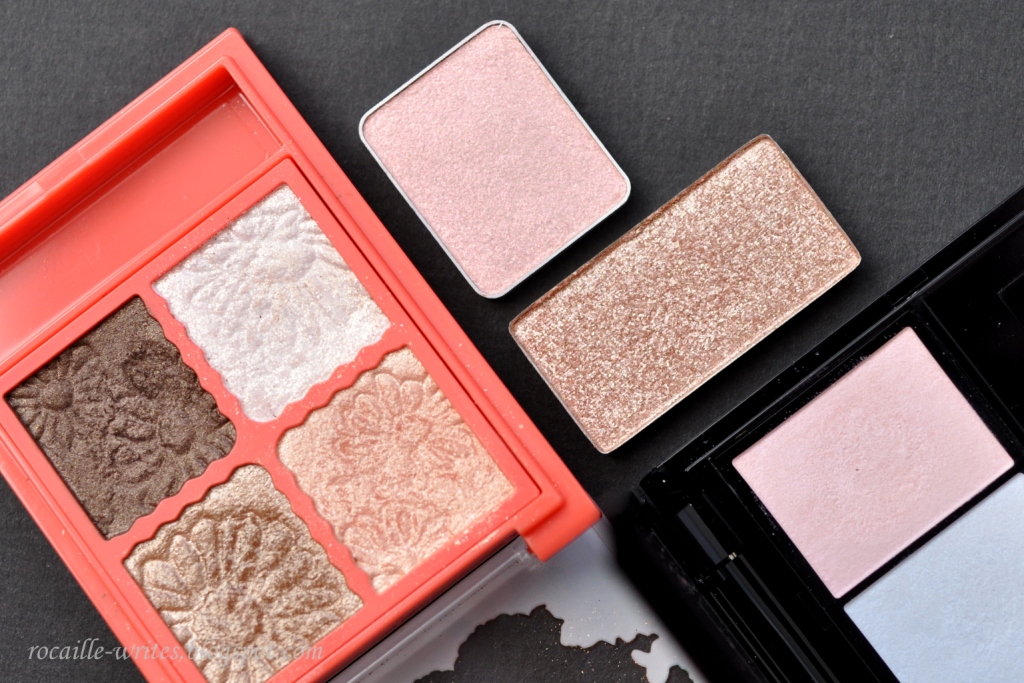 In terms of application and wear, Shu Uemura's Iridescent Pink adheres very well on top of another shadow or a cream base, and doesn't migrate all over my face - no, seriously, I couldn't find any glitter specks on the rest of my face at all. It also doesn't hurt my eyes, and it's not difficult to get off, even with a micellar make-up remover. The texture is creamy & smooth and the glitter quite dense, so patting on with a brush is a piece of cake. 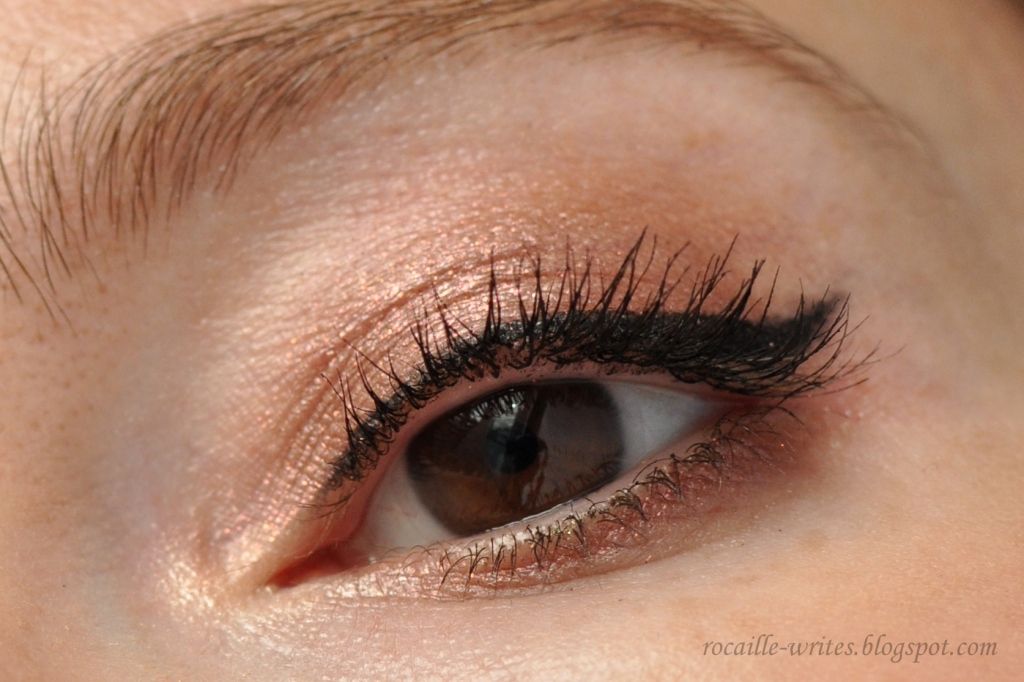 In the arm swatch above, you can see how absolutely stunning IR Pink 115 looks on top of dark shades: I used the Avon Extra Lasting Eyeshadow Pencil in Smoky Plum for the base. In the face shot below, I opted for a lighter base, using the Avon Extra Lasting shadow stick in Amethyst, and the effect was more subtle, but still very pretty, especially in the inner corners where the light hit the glitter at just the right angle. 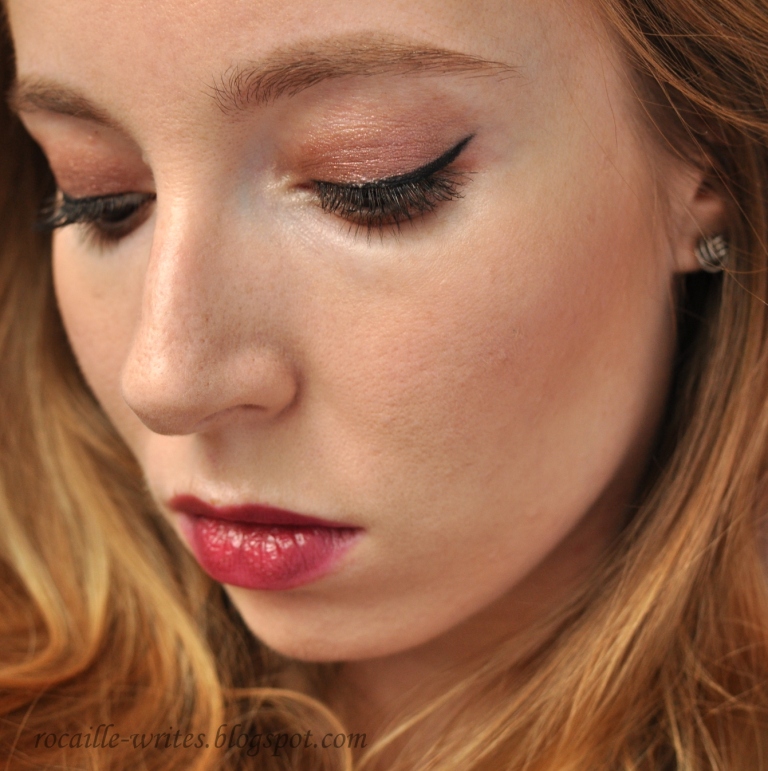 I really wish more of the Shu glitter eyeshadows were available in the US; I guess for now, we have to console ourselves with the sparkly shades in the Tom Ford and Charlotte Tilbury quads. What are your thoughts on glitter eyeshadows? Do you love them, hate them, only wear them for special occasions?
Posted by Monika @ RocailleWrites at 3:10 PM