Burgundies, plums, purples - give me all the vamps for fall. While I like the cheerful colorfulness of warm weather nail polish shades, I've really, really missed the moody darker shades of fall and winter. I thought it was only appropriate to share my current favorites with you; mind you, none of these polishes are new but in my mind, that's for the best: you can often find these older treasures online for a lot less than MSRP. 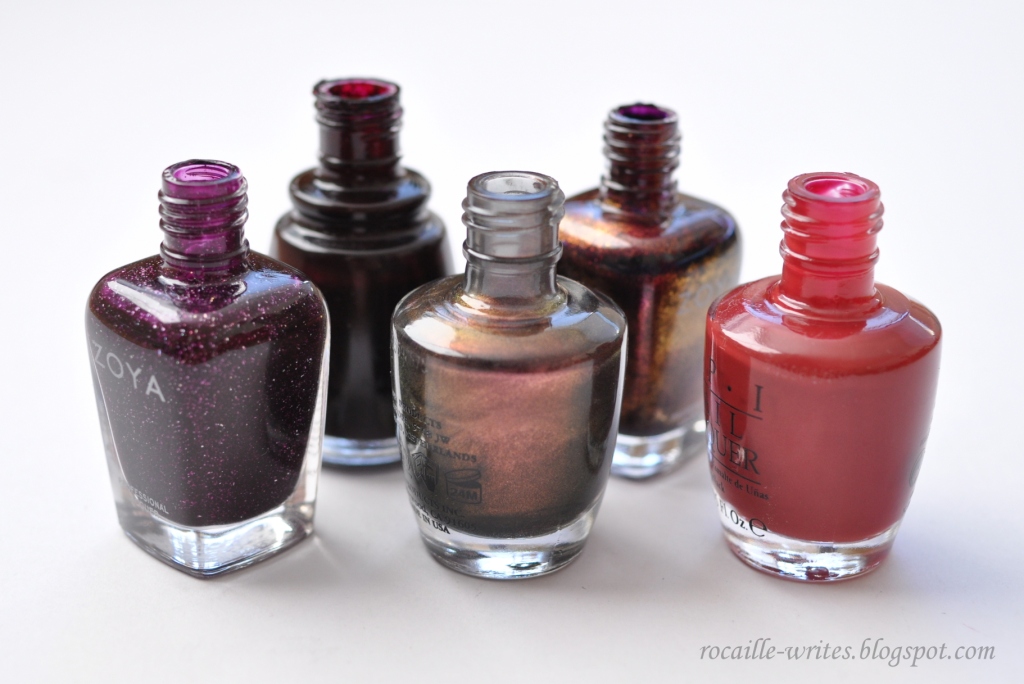 Let's start with a bang - the darkest of five polishes I'm swatching for you today. This is China Glaze Naughty and Nice, originally released with the 2012 Holiday collection and first mentioned on the blog here. As you can see, I still have it and it's definitely been well loved, both worn on its own or as a dark base for glitter toppers. With two coats, it's basically a reddish black with a high glossy finish: simple and stunning. After two years, the formula is still on point, even and just the right thickness. 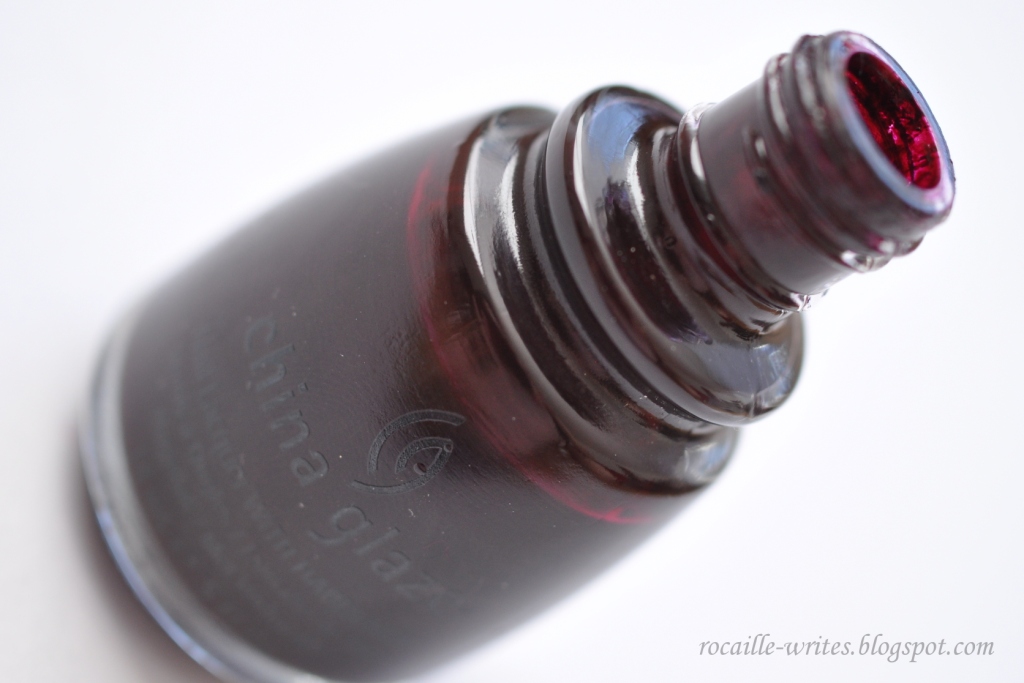 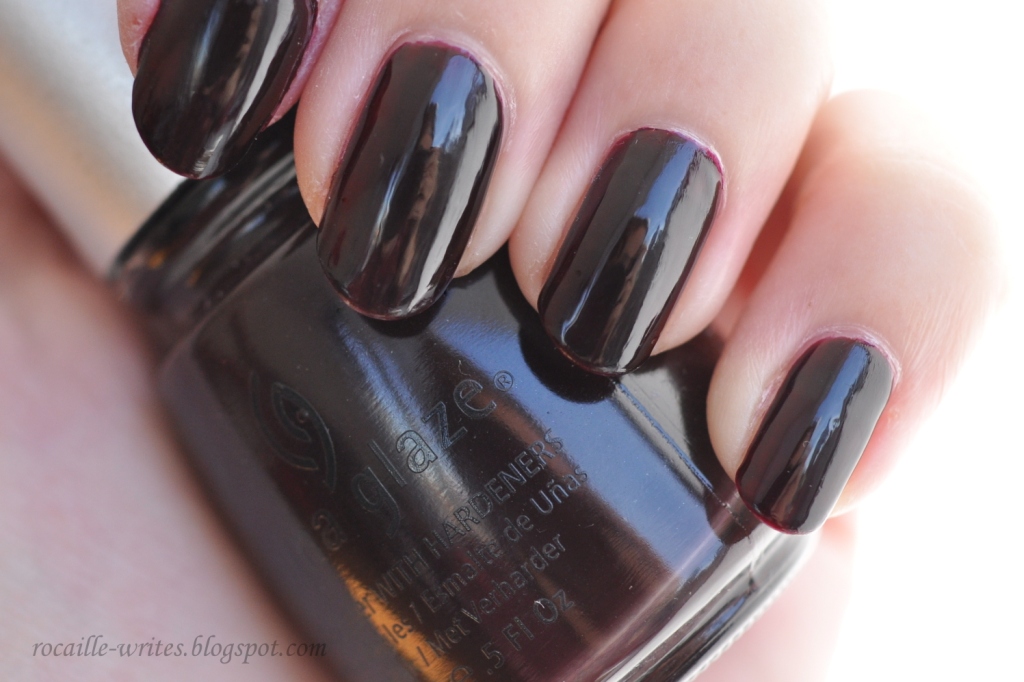 For a newer favorite, I thought that OPI Muir Muir On The Wall from the 2013 San Francisco Collection was just too beautiful to pass up. It's a charcoal black base with green, copper and burgundy shift - I had not really seen anything like it before and it really reminds me of the changing foliage in the fall. Unfortunately, the multichrome effect is not as strong on the nails as it is in the bottle and the formula is a bit on the thin side, but ultimately still worth it in my opinion. 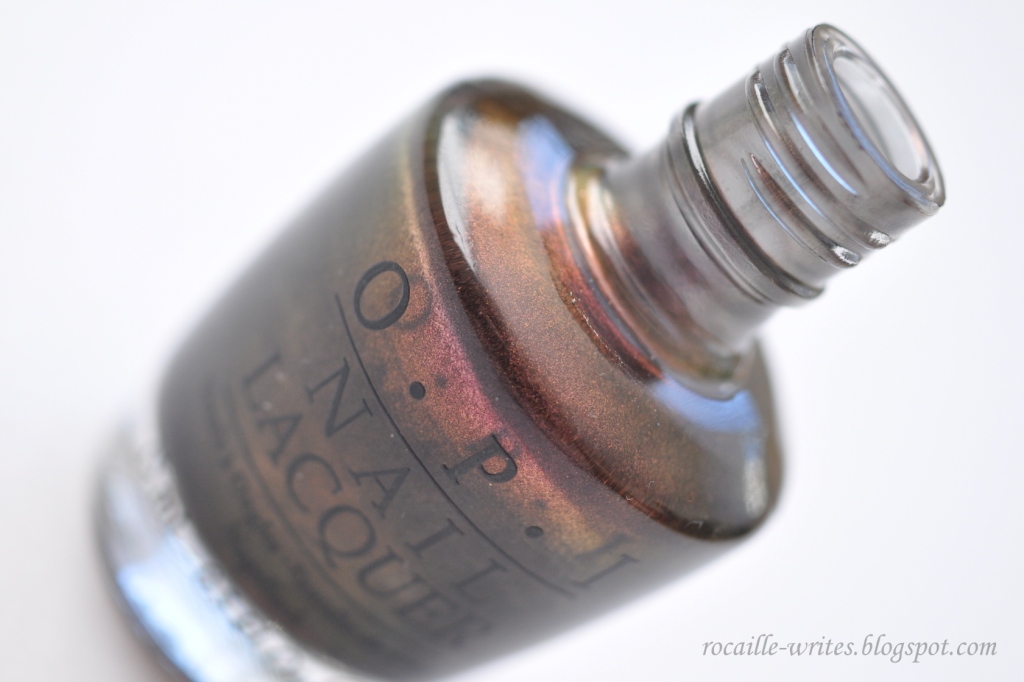 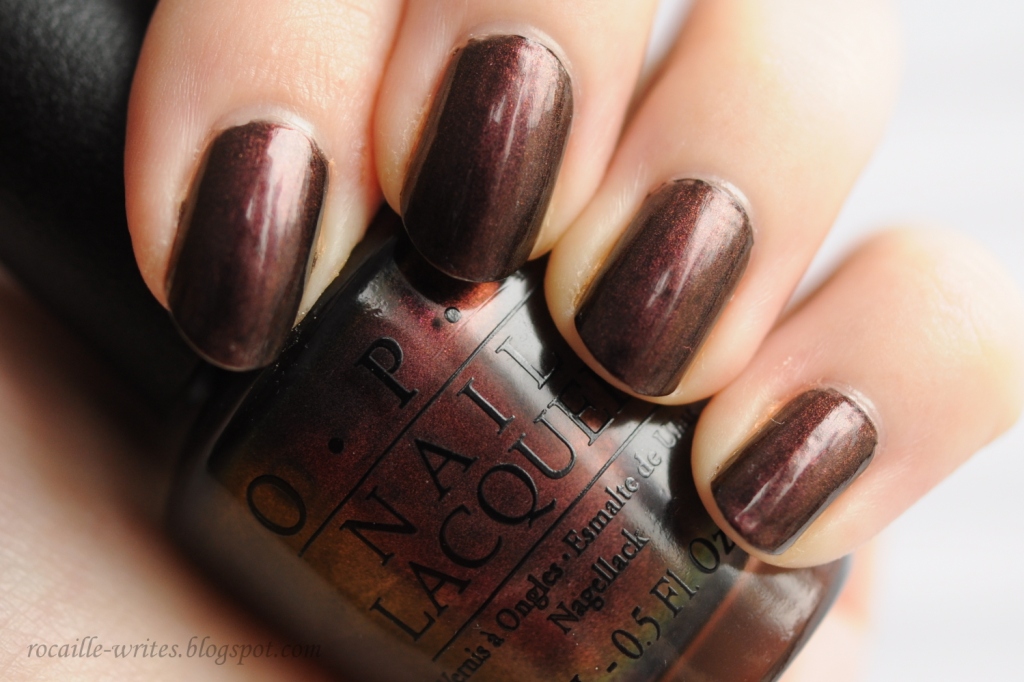 From the same collection, I also got Lost on Lombard, a warm darkened red with a cream finish. Warm reds usually are not very flattering on my cool skintone, but Lost on Lombard works for some reason, and I quite like the brown undertones - I think it's a great red for fall, a bit more muted and subdued than the sparkly festive reds of the Holiday season. The consistency is on par with my other OPI creams and these polishes also last very well on me. 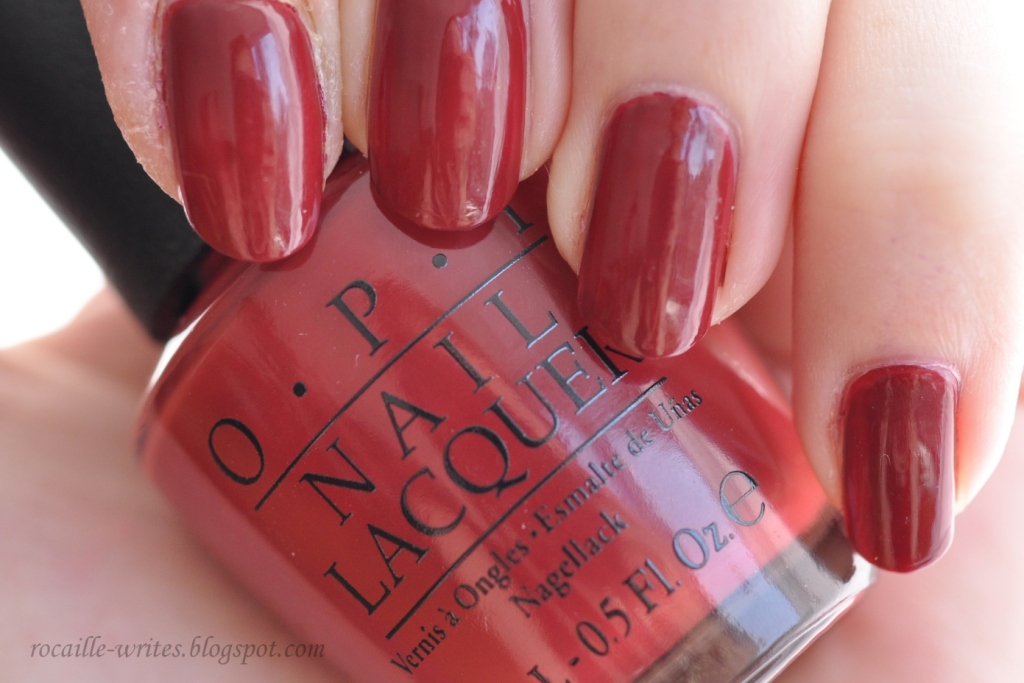 Jem was the first nail polish from Zoya that absolutely stole my heart: I ogled swatches online for a good couple months before finally deciding to pull the trigger. Jem is a dark plum base with copper and gold foil - the shimmer particles are bigger than those of OPI Muir Muir On The Wall. It looks absolutely stunning in the bottle, but again, the beautiful shimmer is much subtler on the nail than in the bottle, and there's not much shift between gold and copper. But, the delicate foil gives Jem some depth and I still find myself reaching for this shade again and again. The formula is easy to work with but not as long-wearing as the OPI shades. 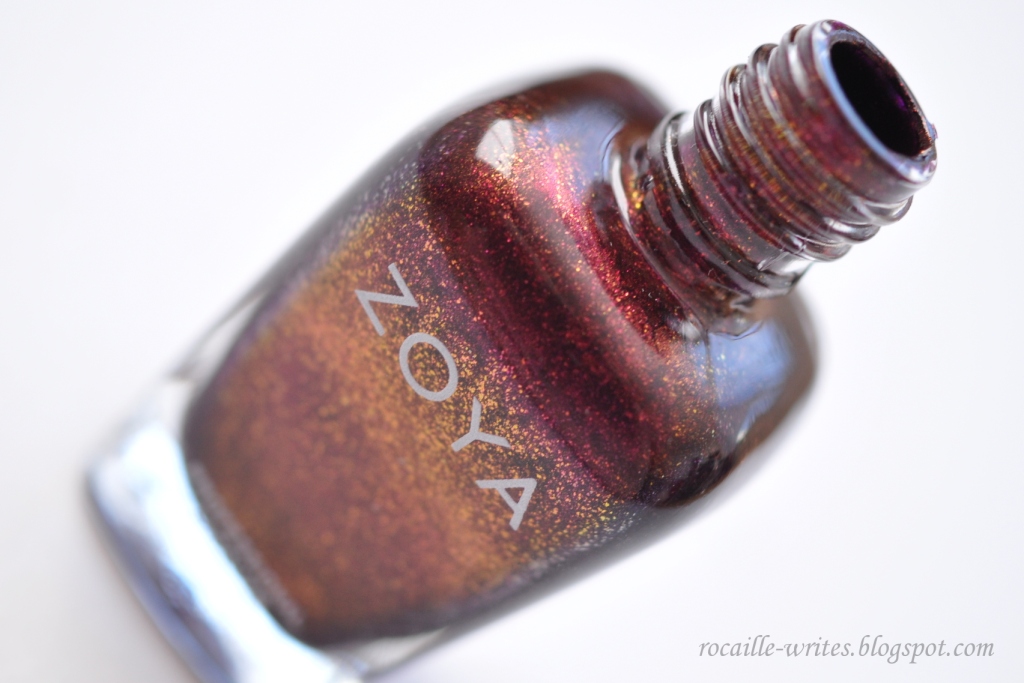 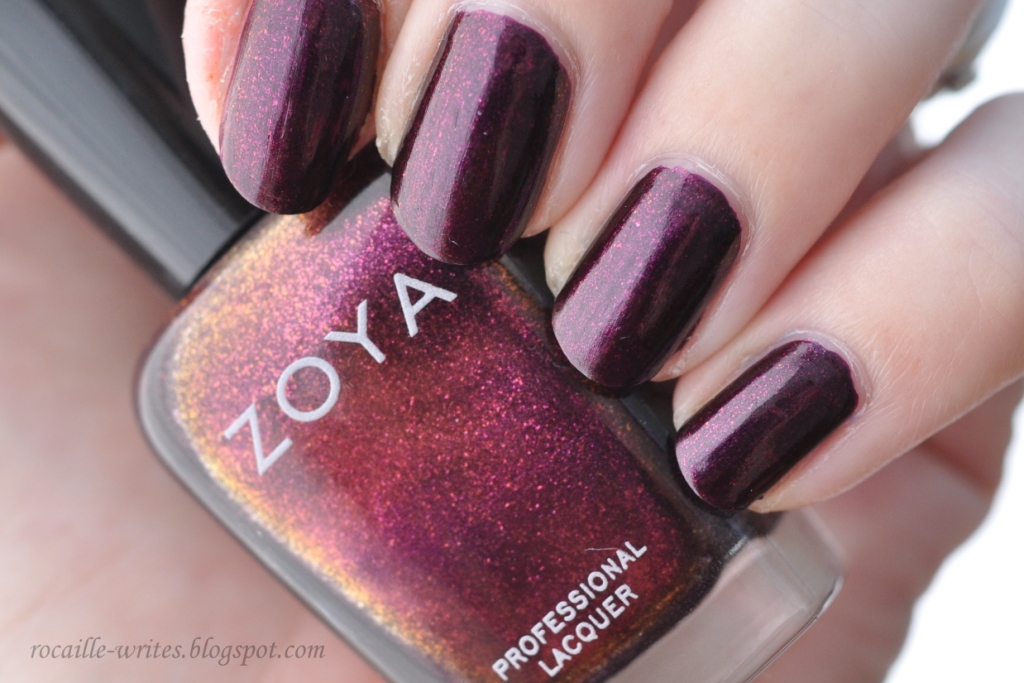 Lastly, a bit of fun: this is Zoya Payton, an eggplant purple jelly base with holographic micro glitter. The holo effect in Payton isn't very strong: at most angles, it reads as scattered silver shimmer, but when light catches it just right, the micro glitters turn all the colors of the rainbow. I previously swatched Payton here, and I still very much enjoy wearing it; I also like it a bit better than Zoya Aurora, another purple with fine holo glitters. I layer two coats of Jem for full opacity and I find it wears very well on me. 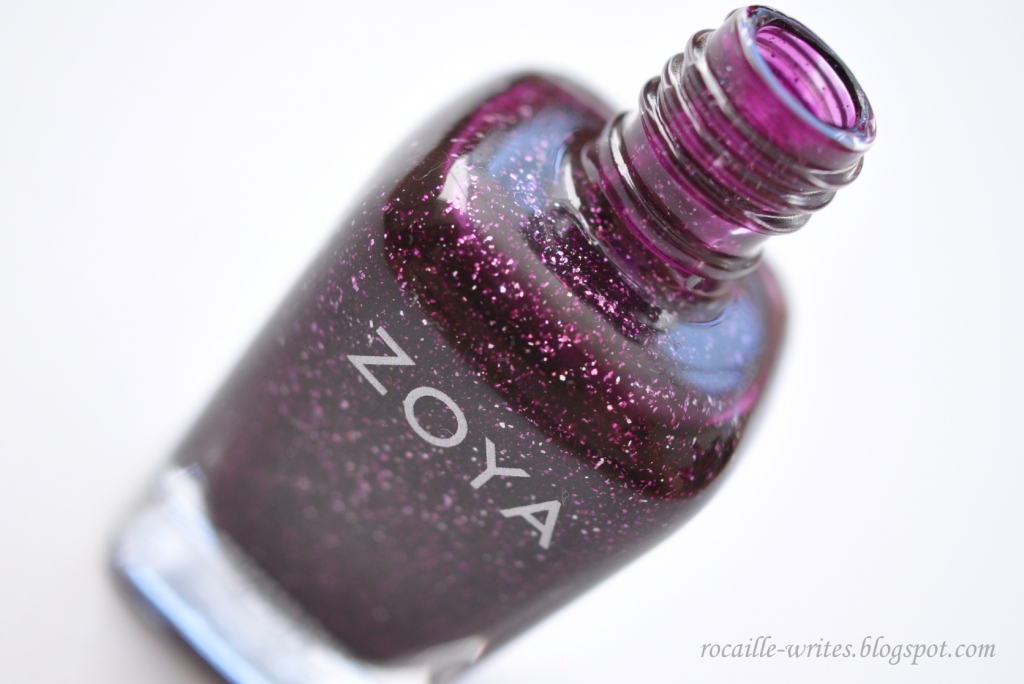 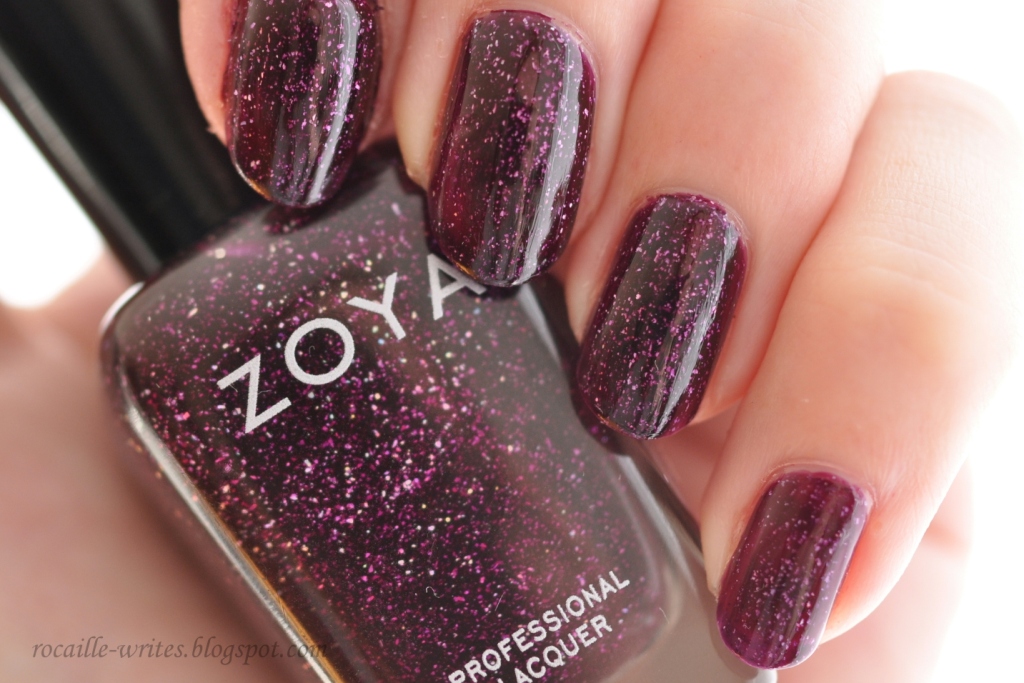 You most likely haven't noticed, but the top of my index finger has been cropped out of four of these photos - it's not because I can't shoot a good frame (well, maybe - but it's irrelevant here) but because the cuticles and nail bed on that finger are thoroughly f*cked up. Here's what happened: in August, I started getting particularly bad eczema flare-ups on that finger, so much so that I had to resort to using topical steroids again. Now, I'm used to steroids absolutely destroying the skin and cuticles on my fingers (think, 90 year old's hands), but this time, the nail got damaged as well, and it's been looking very, very wrong for at least a month now. I'm telling this sickening story not to make excuses for the quality of my swatch photos, but rather to inform my fellow eczema-sufferers, and in hope that maybe something similar has happened to one of you (in which case, I'm sorry!) and you could share your experience. I don't know if my nail & nail bed will go back to normal eventually - I'm hoping the damaged nail will just grow out in time. And speaking of eczema on my hands, would you guys be interested in a separate post on triggers and things I try to keep it at bay? 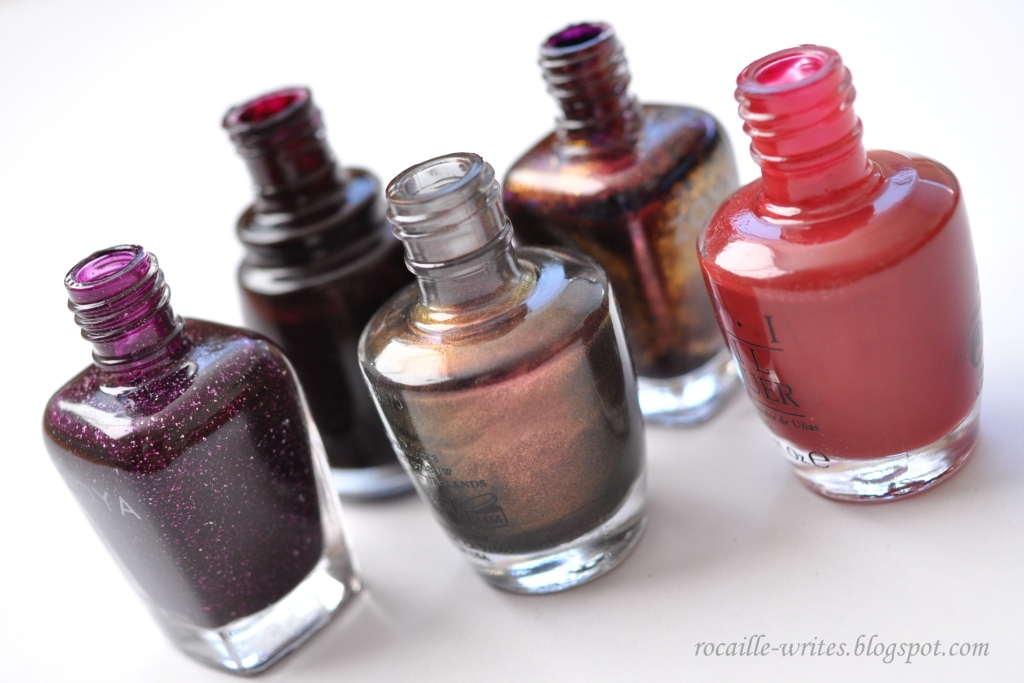 That huge tangent aside, I hope you enjoyed looking at these stunning fall polishes. Do let me know what you're wearing on your nails right now, or your all-time favorite shades for fall - I can never have enough of these vampy varnishes!
Posted by Monika @ RocailleWrites at 10:38 AM