My 10 Most Worn Nail Polishes

I was inspired by an older post of Liz's to do a little round-up of my most worn nail polishes for your viewing pleasure. In my post, I'm actually guided more by the actual usage than instant likes or dislikes and chose bottles where the level of polish was the lowest, which is a combination of a couple factors: how long I've had the bottle, and how many times I've worn a particular shade. 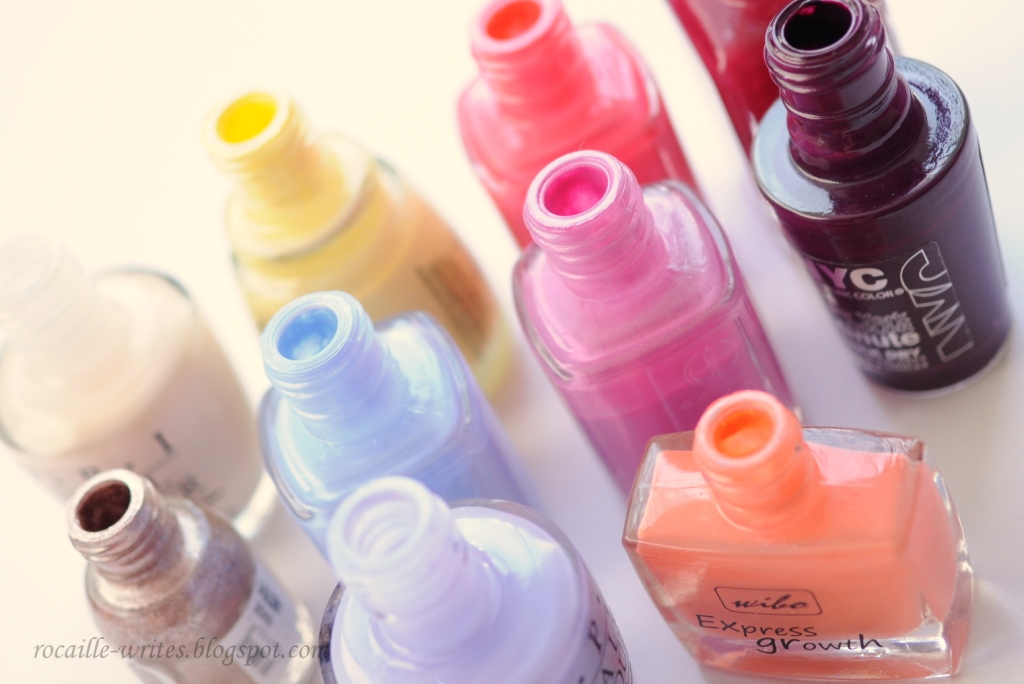 I was quite surprised at some of these - off the top of my head, I didn't think they were my most worn polishes, and one of these I actually disliked quite a bit when I first got it; but anyway, let's get on with it. In no particular order: 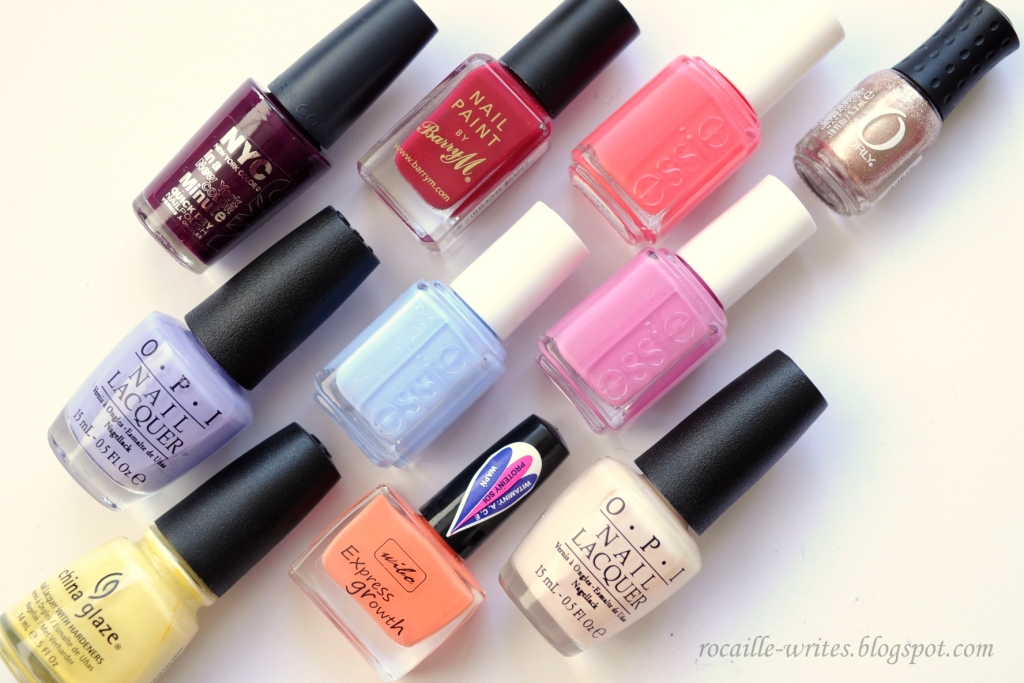 Neutrals: OPI Don't Burst My Bubble (more photos here, swatch here) & Orly Rage (a close-up shot here, partial swatch here).
I don't really like nude and neutral nails - they just don't hold my interest for very long, on top of it being very difficult to find a nude that doesn't give me mannequin hands. But OPI Don't Burst My Bubble is such a very, very light pink that it does stand out against my fair skin, and gives a nice, semi-sheer, glossy nude look to my nails. I also like it as a base for a couple glitter toppers from my stash. I also don't wear metallics very often, but love the foiled rose gold of Orly Rage. Both of these have the added benefit on not showing tip wear too badly, so I especially like them for traveling.

Pastels: China Glaze Lemon Fizz (swatched here and here), Essie Bikini So Teeny (another swatch here), OPI You're Such A Budapest (swatched here), Essie Splash of Grenadine (swatched here and here).
I didn't expect there to be so many pastels among my most worn shades, but I guess I really like pastels? Any shade with a white base looks good on my skintone, actually. I pull out China Glaze Lemon Fizz every year around Easter, which would have been the fourth time this April - I just can't think of a better early spring cheery manicure shade. I wear both Bikini So Teeny and OPI You're Such A Budapest from spring well into summer; you can see in the photos that they're not miles apart, but You're Such A Budapest pulls more lilac. I've had Essie's Splash of Grenadine for four years now too, long before it was made popular by Estee from Essie Button. It's a fantastic purple pink that's not too girly; the white base in this shade causes the shade to look more muted than pastel. A firm favorite for both fingers and toes. 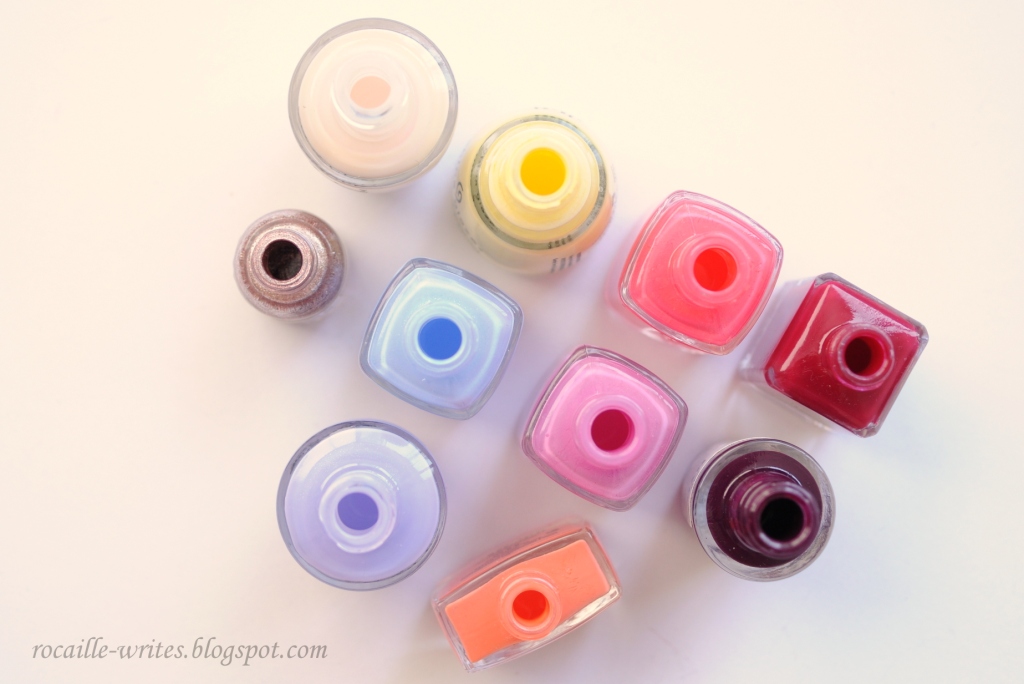 Corals and Reds: Wibo Express Growth no. 328 (an older swatch here; the most similar shade that's readily available worldwide would be OPI Hot & Spicy), Essie Cute as a Button (more photos here), Barry M Raspberry (another photo here, used in a manicure here; the closest shade that's available in the US would be China Glaze Merry Berry, which I own as a back-up), New York Color Manhattan (I haven't seen this shade around in a while, so the closest match would be OPI In The Cable Car-Pool Lane).
Ok, so the Polish brand Wibo no. 328 isn't exactly a coral: it's like a muted apricot cream. It looks a bit more orange in my swatches, but it's a bit more neutral, with a delightful dusky quality. When I first bought this (maybe three or four years ago in Poland), I absolutely hated the application and wasn't convinced about the shade. But I've since learnt not to keep it out when it's very hot, and I find myself craving this apricot every summer without fail. I was surprised not to find any swatches of Essie Cute as a Button on my blog, but it's another staple polish for spring and summer, and I love it for pedicures.

Now, the Barry M Raspberry is possibly the oldest polish in my stash - I want to say it's 5+ years? And while it's still usable, especially with some nail polish thinner, I know it's nearing the end of its days. Raspberry is my favorite classic cool-toned berry red; not a terribly unique shade, but looks great on my skintone, and the formula is spot on. The same can be said about the New York Color Quick Dry Nail Polish in Manhattan; just the perfect balance of berry purple and red, vampy and dark, but not as dark as to look black on the nails.

What shades would make the cut in your most worn round-up?
Posted by Monika @ RocailleWrites at 10:10 AM