The Umbrellas of Cherbourg is a French-German musical film from 1964, directed by Jacques Demy and starring young Catherine Deneuve. The film dialogue is all sung as recitative, which makes it very different from all other musical films. This can be quite annoying, especially at first. However, two songs from the film, I Will Wait For You and Watch What Happens, given new English lyrics, became quite a success. 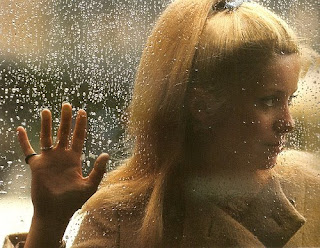 Anyhow, it's not the music than I wanted to blog about. This film is absolutely visually stunning. The decors (Bernard Evein) and costumes (Jacqueline Moreau), all in bright, pastel colors, are set against drizzly, gray streets of the Norman town of Cherbourg. The colors themselves convey a message, emphasize the personalities of each character. Genevieve, a character played by Catherine Deneuve, has a bedroom decorated in blue and pink floral patterns, which shows her innocence and girliness, whereas the apartment of her lover's old aunt is painted in sickly green, symbolizing her age and lack of taste (middle row stills).

The style of the costumes, make-up and hair designs are very much in the spirit of 1960's. Some of the looks have become almost classic, replicated in modern fashion and style. The choice of colors and silhouettes makes me think about the spring and that's probably why I chose to write about it today, with this dreadful weather outside. The film is a great experience for anyone interested in history of fashion or make-up, or just anyone in the mood for a little romance :)
Posted by Monika @ RocailleWrites at 3:17 PM